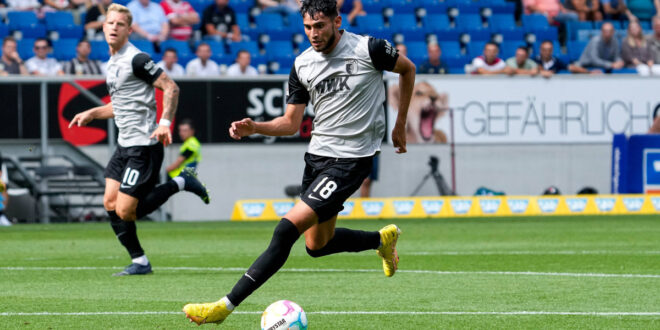 This time last year, Ricardo Pepi’s outlook for both club and country was considerably different.

Roughly 370 days ago, Pepi had just made his decision to represent the U.S. over Mexico on the international stage. He was scoring goals for fun in MLS, wound up a hero in the league’s All-Star Game vs. Liga MX and was on the verge of linking up with the U.S. men’s national team for the start of World Cup qualifying. All was trending upward, and given how the U.S. started its road to Qatar and given the role Pepi played in getting the U.S. back on track, he played a vital part in ensuring the U.S. secured a return trip to the World Cup.

A lot can change in a year.

Pepi has finalized a loan from Augsburg to Dutch top-flight club Groningen for the remainder of this season, and it’s safe to say it’s a necessary move—not just for whatever 2022 World Cup prospects he may have left, but for the entirety of his still-burgeoning career.

“I am grateful that the management at FC Augsburg were able to grant my request for a move on short notice,” Pepi said in a statement. “At my age, it is especially important to get as much game time as possible in order to continue to develop. My goal is to take part in the World Cup with my country this winter, which is why it is even more important that I am able to play regularly. After my loan spell I want to return to Augsburg and establish myself in the Bundesliga.”

Pepi became Augsburg’s record signing last winter on the heels of his breakout fall, leaving the confines of FC Dallas for the rigors of the Bundesliga for $20 million, all after having his name bandied about in transfer links to some of Europe’s giant clubs. At the time, it was promising on a number of fronts—Germany had been the jumping-off point for so many of the U.S.’s current young talents, and the club seemed bullish on his potential, backing that up with its wallet—and appeared to be the next step in a rapid yet natural progression. But upon further review, perhaps going to a relegation-threatened side at a price tag that brought along with it such high expectations was not so prudent, no matter how much Augsburg tried to publicly take the long view.

“Ricardo Pepi makes a great impression,” Augsburg manager Markus Weinzierl said upon his signing. “We think long term with him. He is still very young. He gives us another alternative up-front. But we need to give him time. We will be very, very careful with him. It’s not his fault that the prices are so crazy.”

The problem is, Weinzierl is no longer the manager, and while the club did stave off the drop, it finds itself mired near the bottom of the Bundesliga again with one win in four matches and a limp attack among the root causes. The patience that was preached appears to be running thin. Pepi, at last, started a match over the weekend, but he was yanked after 56 fruitless minutes, and with the club reportedly seeking to bolster its attacking ranks before Thursday’s transfer deadline, sticking it out and hoping for things to change seems like the least-productive course of action if the desire is an immediate change of personal fortune.

At this point it’s well documented that Pepi hasn’t scored in a competitive match since his second strike vs. Jamaica on Oct. 7. Going to the Eredivisie, where the scoring tends to be a bit more free-flowing, could be just what he needs to rediscover that finishing touch. This loan could yet have World Cup ramifications, but it’s not really about that. It’s about getting a once-derailable player back on track.

His ongoing slide has coincided with surges in form from a number of fellow U.S. forwards, including his former FC Dallas teammate Jesús Ferreira and Europe-based Josh Sargent, Jordan Pefok and Haji Wright. Other high-scoring forwards in MLS on more of the periphery of the U.S. picture like Brandon Vázquez and Jeremy Ebobisse have achieved more than Pepi has to remain on the radar before the final pre–World Cup camp in September.

“Am I concerned about Ricardo Pepi? Absolutely, no question about it. We want him scoring goals. We want all our strikers scoring goals,” U.S. coach Gregg Berhalter said before the last World Cup qualifying window. “One thing with Ricardo is getting back to the basics with him. He’s a goal-scorer and that comes naturally to him. And that’s something we need him to refocus on, clear his mind, focus on doing the small things, getting in good positions, because if he gets in good positions, we’re comfortable he’s going to score.”

The same sentiment applies today, and the hope surely is that the change of scenery provides an environment conducive to all of that. Pepi doesn’t turn 20 until January. His is not a story of great failure. But it is one that lays out the potential perils and pitfalls that can accompany moves abroad at a period of relative inexperience in a player’s career.

Groningen has 10 matches before the World Cup break, though it would be understandable if Pepi wasn’t ready to immediately integrate. That might not be enough time to rebound and complete his ascension to this World Cup, but it could be the beginning of ensuring he’s firmly part of the picture for the next one.