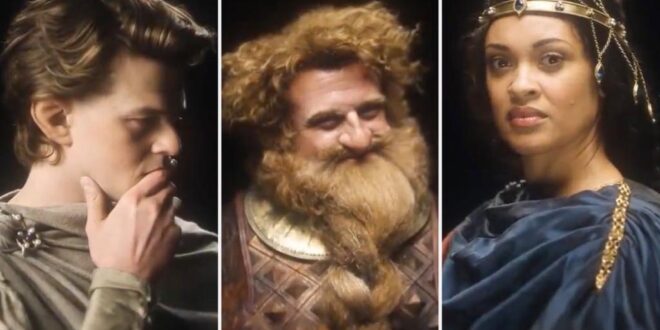 Fans of Amazon’s “The Lord of the Rings: The Rings of Power” had a laugh on Twitter when a goofy promotional video for the new series was confused for the series’ opening sequence.

“Apparently this is the intro for the new LOTR show… this is what $750 million buys you,” a Twitter user wrote alongside the clip on Wednesday, mocking the series’ enormous price tag.

That video — which now has 4.1 million views, more than 20,700 likes and 10,000 quote tweets — features the “Rings” cast gazing into the camera as well as making bizarre, comical movements.

“Half of the actors look like someone snuck up on them in between takes while they were having a conversation or eating a sandwich,” one Twitter user said.

However, in a sea of jokes about the video, many users pointed out that Entertainment Weekly’s watermark is in the corner of the video, meaning it’s obviously not the series’ opening credits.

“I wonder why the intro has the entertainment weekly logo in the bottom corner that’s a funny little feature,” one user slammed other gullible tweeters.

“I enjoy the cheesy 90s drama series vibe. Had to hone in on it,” another user said, adding nicknames and an ocean sunset behind the characters in the video.

“Dumpster fire doesn’t even begin to cover it. This will be meme fodder for the next decade,” another declared.

“That’s the ‘Young and the Restless’ credits,” another said of the longtime soap opera.

Other users quickly turned the video into a point of view — or POV — meme, coming up with scenarios for the characters’ shady looks.

“POV: you’re walking through a gay bar on a Saturday night,” one user wrote.

“POV: you’re blacking out drunk at a party and muttering goodbyes to people as you’re stumbling towards the exit to get home,” another joked.

“POV you’re leaving the office at a company ‘that’s really more like a family’ at 5pm,” another quipped.

“The Rings of Power” is set around a thousand years before Frodo (Elijah Wood) and his Fellowship took their journey in the movies.

A “Rings” fanboy himself, Amazon founder Jeff Bezos attended the show’s global premiere on Tuesday, thanking everyone who made the show possible — even though showrunners ignored his advice.

“The Lord of the Rings: The Rings of Power” is now streaming on Amazon Video.