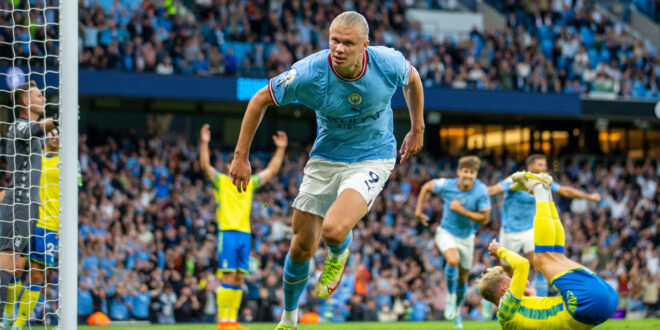 Erling Haaland is answering any and all questions about his integration into Manchester City and the Premier League, one goal at a time. Or, in the case of the last two matches, one hat trick at a time.

The Norwegian, who signed with City from Borussia Dortmund this summer, leads the Premier League with nine goals in five games and is on an absolutely torrid pace. He scored with his first touch on Wednesday, finishing from in close after Phil Foden provided the assist.

He worked a wonderful combination in the Forest box with Foden again 11 minutes later, winding up with an unmarked look from close range.

His third came from even closer than the previous two, with the striker using his giant frame to out-leap Forest’s defenders and head in from the goalmouth.

With his nine goals, Haaland is presently outscoring 15 Premier League teams, and while that pace surely is not sustainable, it’s an early warning shot from Man City’s new leading man about what he has in store for his new league.

Previous Sergino Dest Loan: AC Milan swoops for USMNT, Barcelona right back
Next Ricardo Pepi’s loan to Groningen is about more than the World Cup