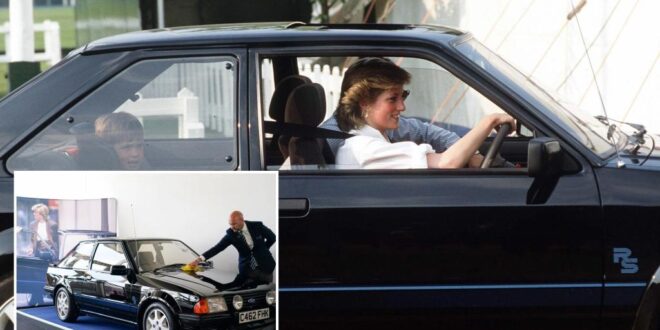 Princess Diana’s beloved 1985 Ford Escort was sold for more than $850,000 at a UK auction held Saturday.

The vehicle was typically made in white, but was customized for her, painted in black at the request of the royal family police guard “for discretion.”

The late princess was seen driving the car around Chelsea and Kensington before she returned it to Ford with about 6,800 miles on it.

“All the other members of the royal family would be driving around London in the back … of an official car … and she’s driving in a car … that you would see on a housing estate not outside the palace.” Arwel Richards, a classic car specialist at Silverstone Auctions told Reuters a few days ago.

A video posted by Richards on Twitter Saturday showed a crowd of people applaud after the final bid was accepted at Silverstone’s racing circuit.

The unique ride had multiple owners after Princess Diana and has about 25,000 miles on it.

The new owner of the car was not identified by Silverstone.

The auction comes a week before the 25th anniversary of Princess Diana’s tragic death when a limo the 36-year-old was a passenger in crashed in a Paris tunnel to avoid paparazzi chasing her on motorbikes.

Previous MTV VMAs ready to host, honor some of music’s biggest acts
Next ‘The Invitation’ makes $2.63 million on opening night