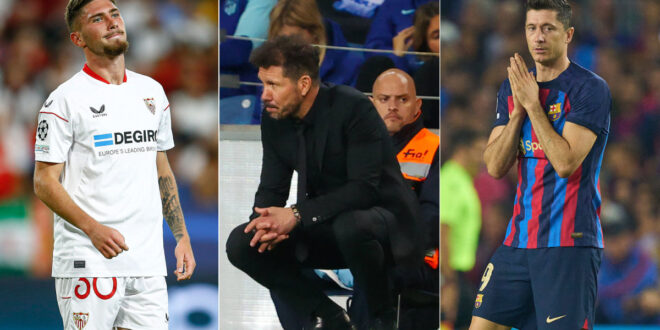 Atlético Madrid: Five points from six games and a last-place finish. OUT.

Sevilla: Five points from six games. OUT, but into the Europa League’s knockout phase after finishing third.

Barcelona: Seven points from six games. OUT, but into the Europa League’s knockout phase after finishing third.

Real Madrid: 13 points from six games. THROUGH to the last 16 of the Champions League, top of its group.

As you can see, this has not been a good year for Spanish clubs in the Champions League. In fact, it’s been the worst year in the 19 seasons since the competition began processing eight groups into a last 16. There’s never been a season before in which only one team from La Liga reached this stage. There have only been two (2004–05 and ’11-12) in which only two made it through.

There are always reasons. With any statistic of this kind, it’s always possible to find explanations for why individual clubs have not made it. Sevilla lost the heart of its defense as Jules Koundé went to Barcelona and Diego Carlos to Aston Villa, and its domestic form has been dismal. Drawing Manchester City and Borussia Dortmund meant third was probably a realistic ambition.

Barcelona also could blame its group. To be drawn with not only its eternal nemesis Bayern Munich but also Inter Milan was tough. (It should be pointed out that Inter lies only sixth in Serie A this season: It is not some unconquerable monster. Indeed, it has been defeated four times already this season by teams other than Bayern.) Perhaps the summer of intense transfer activity has proved disruptive and there will be a process of settling in and consolidation, but that seems like the most generous line it’s possible to take for a spree that has effectively mortgaged the future of the club.

Atlético Madrid, meanwhile, seems endlessly trapped in a netherworld between manager Diego Simeone’s instincts and the demands of the modern game. Simeone is just about the last holdout at the elite level of the game for a reactive style of play, yet his squad contains numerous more creative players. It’s as though he knows he must open out but is either unable or unwilling ultimately to introduce a more proactive style. Perhaps Atlético can think itself unfortunate to be drawn with Club Brugge, which has far exceeded expectations, but a group made up of Bayer Leverkusen and Porto should have held few demons.

The question, then, is whether this is a one-off or indicative of a longer-term decline. There is an obvious response to suggestions Spanish football is in retreat, which is that Real Madrid is the reigning European champion. Its progress from a fairly straightforward group has been serene enough. But even last season’s success may not be quite the endorsement for the Spanish game it appears.

To call Real Madrid fortunate would be unfair, but equally in the three knockout ties leading up to the final—against PSG, Chelsea and Manchester City—it was reliant on late surges that spoke more of self-belief and a capacity to produce in big moments than domination. It was a triumph based on the individual abilities of Karim Benzema, Luka Modrić and Thibaut Courtois, who are, respectively, 34, 37 and 30. There was no sense of tactical frontiers being pushed and, at some point, it will have to stop relying on the genius of these aging individuals.

And that hints at both issues that seem to be affecting the Spanish game. The first is a lack of money, as clubs struggle to overcome the losses of the pandemic. Barcelona spent a net $122 million in the summer and required extraordinary measures to do so. The next-highest net spend was Atletico with $20.3 million. For comparison’s sake, Barcelona would have ranked just seventh for net spend in the Premier League, and Atlético 15th.

That feeds into another, less definable, feature, which is a sense that La Liga is no longer in the tactical vanguard. Barcelona dominates most La Liga games, but keeps losing in the same way, picked off by opponents who can attack in rapid transitions. Since the 4–0 and 3–0 defeats to Paris Saint-Germain and Juventus in 2016–17, Barcelona has repeatedly found itself physically overmatched by opponents. Madrid has suffered that too, notably in defeat to Manchester City in ’19–20. If Atlético has not suffered on that score, it has only been at the expense of attacking intent. A long-signaled decadence is perhaps at last coming to the fore. Of the last 16 teams standing, half come from England and Germany. Even Portugal fielded two group-winning teams, Porto and Benfica.

What is to be done? It’s the nature of European football that dominant teams and dominant leagues, grown old and complacent, losing their radical edge, eventually fall away, but that process has been accentuated by the financial downturn in the Spanish game. It’s little wonder a Super League has begun to look like an attractive alternative for the Spanish elite.

Previous Football and mental health: Defying the game’s ‘hypermasculine’ culture of silence
Next Apple’s own 5G modems might come to iPhones later than expected