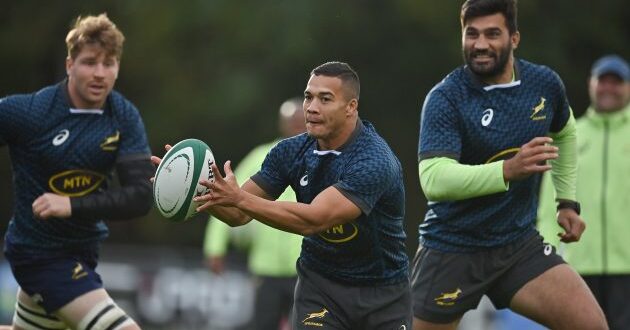 Cheslin Kolbe will play his first Test at full-back as the Springboks open their European tour against world No 1 Ireland at Aviva Stadium on Saturday.

Toulon star Kolbe, whose last Test was in the summer series against Wales, features in an experienced line-up; Bulls wing Kurt-Lee Arendse is the only player in the starting XV with fewer than ten caps.

Former Munster centre Damian de Allende is one of eight Japan-based players in the match squad. That 23 contains just one UK & Ireland-based player in Leicester No 8 Jasper Wiese.

“We selected a team we believe contains the best combinations to counter the threats posed by Ireland,” said head coach Jacques Nienaber. “Damian (Willemse) has done well for us at fly-half and he’s continuing to grow as a player in that role, while we think Cheslin has the potential to add a new dimension to our game at full-back.

“He was sidelined for a while after breaking his jaw against Wales, but he has played four 80-minute matches for Toulon since returning to play, and we’re confident that he will step up to the challenge.”

There is a six-two split on the bench, with Faf de Klerk and Willie le Roux covering the back-line. De Klerk and Kolbe are both fly-half options should Willemse not go the distance.

The Springboks face three of the world’s top five teams on their four-Test tour and Nienaber expects a huge challenge against the country that won a series in New Zealand last summer.

“Ireland are the top-ranked team in the world and they’ve shown in the past that they can be a force to reckoned with in Dublin. We last faced them on their home patch in 2017 and they beat us 38-3 in that match, and they also beat us here 29-15 in 2014 and they will draw confidence from that.

“Similarly to us, they will view this as a vital clash with an eye on next year’s Rugby World Cup in France where we will cross paths in the pool stages.”

Wing Sbu Nkosi and flanker Marco van Staden, who suffered rib injuries in the Bulls’ URC clash against the Sharks on Sunday, have pulled out of the squad. They will not be replaced at this stage as Nienaber feels there is sufficient cover in the touring group.

Previous Liz Cheney praises Nancy Pelosi as a ‘tremendous leader,’ warns against electing a GOP majority
Next California could be hit with ‘conservative tsunami’ after group’s voter registration efforts: Grenell