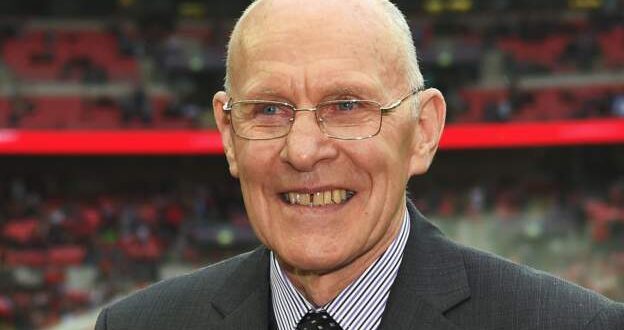 Ronnie Radford, scorer of one of the most iconic goals in FA Cup history, has died at the age of 79.

Radford powered home a 35-yard first-time shot on a muddy pitch to help non-league Hereford United upset top-flight Newcastle United in the third round in 1972.

“Ronnie is not just a part of Hereford United folklore, he is a part of football history,” said Hereford.external-link

“We will always keep Ronnie close to our hearts at Edgar Street.”

Watched by 14,000 fans packed in to Edgar Street on 5 February 1972, Newcastle looked set for a place in the fourth round thanks to an 82nd-minute Malcolm Macdonald goal.

But three minutes later Radford won back possession and played a one-two before his stunning finish took the replay to extra time.

“I went in for a tackle with John Tudor on halfway and came up with the ball,” Radford told BBC Sport in 2015.

“I turned, saw Brian Owen and played the ball up to him. He gave it back and it sat up just right. I didn’t think about the distance, I just thought: ‘I’ve got to hit this.’ It could have gone in the car park. But it didn’t.”

Substitute Ricky George scored the winner as Hereford became the first non-league club to defeat a top-flight side since 1949.

Newcastle United paid tribute to Radford. “Though against us, a goal forever written into FA Cup folklore. Rest in peace, Ronnie,” the club said on Twitter.external-link

Radford played as an amateur for Sheffield Wednesday while earning his apprenticeship as a joiner, and played in Leeds’ youth team alongside Norman Hunter, Terry Cooper and Gary Sprake.

Radford was signed for Hereford by Wales, Leeds and Juventus and legend John Charles.

His goal also helped launch the career of one of football’s best-known broadcasters, John Motson, whose commentary became synonymous with the goal.

“Oh, what a goal! What a goal! Radford the scorer… and the crowd are invading the pitch,” a 26-year-old Motson exclaimed.

Hereford, who host League One Portsmouth in the FA Cup first round on Friday – a game that will be shown live on BBC Two at 19:55 GMT – said Radford’s famous goal has kept the club on the football map for half a century.

“His mild manner and friendly and modest approach to life epitomised the man he was, and he was always delighted to visit Edgar Street, to meet up with past team-mates and watch the present day team in action,” a club statement read.

“We will celebrate him and his huge role in propelling Hereford United to the forefront of the nation’s attention with that goal and being part of that team.”

Previous Republicans slam DHS’ ongoing crackdown on ‘disinformation’ after disbanding controversial governance board
Next Christian Pulisic, buried at Chelsea, must rise for the World Cup