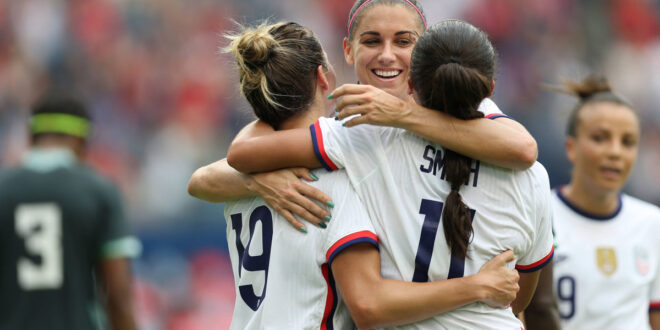 Fresh off winning NWSL MVP and helping lead the Portland Thorns to the league championship, Sophia Smith is turning her focus back to the U.S. women’s national team’s attack. And this time, she’ll have some additional reinforcements beside her.

Alex Morgan and Mal Pugh, who were among those who missed the U.S.’s defeats to England and Spain earlier this month, have returned for a pair of friendlies on home soil against Germany in November. U.S. manager Vlatko Andonovski revealed his 24-player squad on Monday, and with the U.S. seeking to bounce back from the first set of consecutive defeats for the USWNT in over five years, the third-ranked Germans, who finished as runner up at the Women’s Euros this past summer, represent a difficult challenge.

With Germany due to be on the opposite end of the Women’s World Cup bracket, should both sides get out of their group next summer, these games also carry with them the potential of being World Cup final previews. But first things first for the USWNT: Get back on track after a substandard October window.

“These are the kinds of games that help our World Cup preparation in many ways and these 180 minutes to end our schedule this year are going to be extremely valuable for the players and coaches,” Andonovski said in a statement. “It will be good to get some players back on the roster and we’re all expecting these games to be very competitive and entertaining for fans.”.

If Morgan, who was out with a knee injury for the European trip before returning for the NWSL playoffs, plays in both matches, she’ll hit the 200-cap mark while coming off a Golden Boot-winning season in NWSL. She scored 15 goals for the San Diego Wave, besting Smith by one to earn top-scorer honors. Pugh, who had a “family commitment” according to U.S. Soccer during the last window, scored 11. Smith, meanwhile, won NWSL final MVP in addition to her regular-season award and is one of four players from the champion Thorns to be called in, along with the resurgent Crystal Dunn, U.S. captain Becky Sauerbrunn and standout rookie midfielder Sam Coffey.

Another NWSL award winner, Rookie of the Year and Defender of the Year Naomi Girma, is also among the headliners for the Americans.

In goal, Adrianna Franch rode her strong playoff performance with finalist Kansas City to a recall. She was among the U.S. goalkeepers for the 2019 Women’s World Cup and joins Alyssa Naeher and Casey Murphy in camp. The two sides will first play at DRV PNK Stadium in Fort Lauderdale, Fla., on Nov. 10 before heading north to Red Bull Arena in Harrison, N.J., on Nov. 13.

Here is the U.S. squad in full:

Previous Football regulator: Clubs warn government of ‘knockout blow’ without reforms
Next Florida girl, 13, arrested after posting threat to blow up school because she was ‘bored,’ cops say