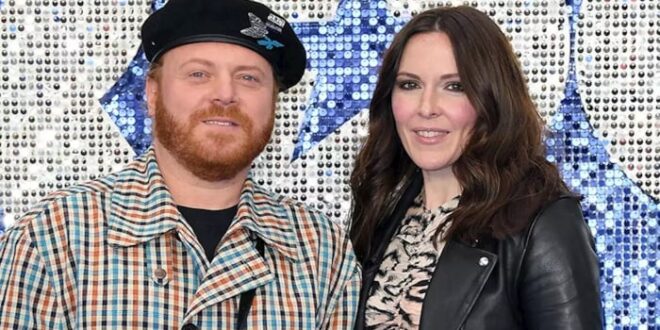 The comedian and TV star, 49, has been dating the beauty therapist, 46, since they were teenagers, and eventually tied the knot in 2002 in Allerton Castle, North Yorkshire.

Their 31 October anniversary date meant Leigh’s Instagram post was fittingly spooky, sharing a range of snaps of their Halloween outfits over the years.

Writing to his wife before his 1.7million followers, the Celeb Juice host said: ‘Happy anniversary to my most favourite and best!

’30 years together 19 married! How time flys when ya madly in love!

Leigh’s TV star friends all congratulated the private pair in the comments, with Carol Vorderman leaving a heart emoji beneath the post and Emma Bunton writing: ‘Happy anniversary you gorgeous pair.’

Last year, Leigh gave a rare insight into his romance with Jill, admitting he is ‘punching above his weight’.

The couple first met when she was 16 and he was 19, with the comedian admitting that people thought their relationship was ‘cringey’.