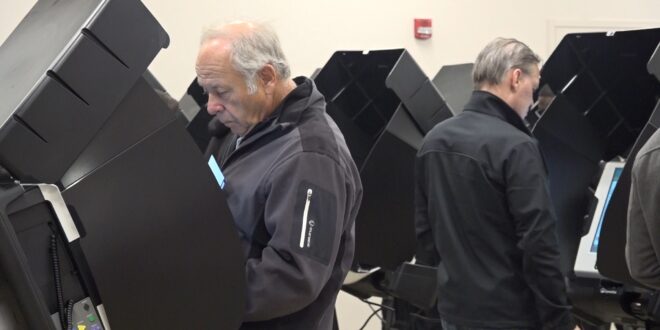 Former President Barack Obama is back on the campaign trail on a simple but important mission to try and save the Democratic Party from getting drenched by what could end up being a powerful red wave in next week’s midterm elections.

“I’m here to ask you to vote,” Obama urged Democrats as he headlined large rallies in three crucial battleground states this past weekend.

Obama, who remains the most popular person in the Democratic Party nearly six years after he left the White House, is trying to perform some last-minute political magic as his party desperately tries to hold onto razor-thin congressional majorities.

Tuesday marks one week until Election Day 2022 when about a third of the Senate, all 435-members of the House of Representatives, and governors’ offices in 36 of the 50 states are up for grabs.

Democrats are facing historical headwinds — the party that wins the White House traditionally suffers major setbacks in the ensuing midterm elections — and a very rough political climate fueled by record inflation, soaring crime and a border crisis, and these are accentuated by President Joe Biden’s rebounding but still underwater approval ratings.

“It’s real simple. People are fed up with open borders, high inflation, high crime. They’re just fed up with this stuff, and the Democrats did it,” GOP Sen. Rick Scott of Florida, chair of the National Republican Senatorial Committee, said in an interview with Fox News on Monday.

The Senate is currently split 50-50 between the two major political parties, but the Democrats control the majority thanks to the tie-breaking vote of Vice President Kamala Harris through her Constitutional role as president of the Senate. That means Republicans need a net gain of just one seat in the midterms to win back the majority they lost when they were swept by the Democrats in Georgia’s twin Jan. 5, 2021, Senate runoff elections. 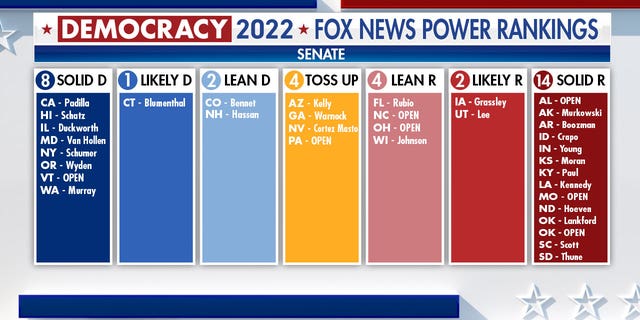 Fox News Power Rankings indicate the political leanings of the states for the Senate. Democrats lean 2, 1 likely, and 8 solid. GOP lean 4, 2 likely, and 14 solid. Toss up at 4.
(Fox News)

Republicans are defending 21 of the 35 Senate seats in contention, including five open seats where GOP senators are retiring rather than running for re-election. Two of those open seats are in the battleground states of Pennsylvania and North Carolina with another in the competitive state of Ohio. And Republican Sen. Ron Johnson in the swing state of Wisconsin is facing a challenging re-election.

But the GOP for more than a year and a half has been targeting the four first-term Democratic senators from the battleground states of Arizona, Georgia, Nevada and New Hampshire who are running for re-election. And Republicans also see possible picks in once reliably blue Colorado and Washington state.

Scott predicts Republicans will win back the Senate majority and control “52-plus” seats in the next Congress.

Republicans lost the White House and the Senate majority in the 2020 cycle, but the House GOP defied expectations and overperformed, taking a big bite out of the Democrats’ majority in the chamber. Fast-forward two years, and Republicans need a net gain of five seats in the midterms to win back the control of the chamber they lost in the 2018 elections.

Boosting Republicans this cycle is their most diverse class ever of congressional candidates.

“Republicans have an all-star class of candidates who represent the diversity of our country. These candidates are going to win on Election Day, and they will deliver for the American people,” National Republican Congressional Committee chair Rep. Tom Emmer told Fox News a couple of weeks ago.

In the battle for the states, Republicans currently control 28 governors’ offices, and Democrats run the other 22. 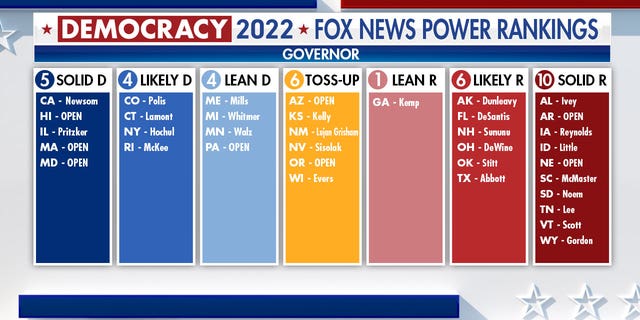 Republicans aim to flip Democratic-controlled governorships in Kansas, Maine, Michigan, Minnesota, Nevada, New Mexico and Wisconsin. Biden carried all those states – other than Kansas – in the 2020 presidential election. Democratic incumbent governors are running for re-election in all of those states. And in New York State, where Democratic Gov. Kathy Hochul is running for a full term to steer the reliably blue state, conservative Rep. Lee Zeldin has dramatically narrowed the gap.

While playing plenty of offense in gubernatorial races, the GOP is also on defense in Arizona and the blue states of Maryland and Massachusetts, where Republicans are defending open governorships. Democrats are also eying a possible pickup in the red state of Oklahoma and in battleground Georgia, where Republican Gov. Brian Kemp is in a high-profile rematch with Democrat Stacey Abrams.

Republicans enjoyed strong political tailwinds during the second half of last year and the first half of this year as surging gas prices fueled record inflation, and rising crime and an unrelenting crisis along the U.S.-Mexico border grabbed outsized attention.

But the blockbuster move in late June by the Supreme Court’s conservative majority to overturn the landmark Roe v. Wade ruling and send the combustible issue of legalized abortion back to the states energized Democrats, boosting them with female and suburban voters who helped power Democrats to a blue wave in the 2018 midterms.

The Dobbs v. Jackson Women’s Health Organization abortion ruling, along with declining gas prices and a slew of legislative victories by Biden and congressional Democrats, gave the party a shot in the arm over the summer as their poll numbers rebounded.

But polls indicate the Democrats’ summer surge didn’t last into autumn as gas prices once again spiked, inflation concerns didn’t dissipate and Republicans inundated the airwaves with ads bashing the Democrats over crime.

“As much energy and excitement as the Dobbs decision generated, what we’re going to find on Election Day next week is that this is going to look exactly as everybody expected pre-Dobbs, like any other midterm election where the party in power is going to suffer some fairly significant losses,” veteran political scientist Wayne Lesperance, the interim president of the New Hampshire-based New England College, told Fox News.