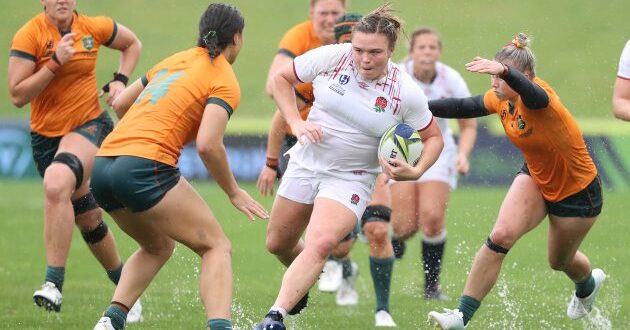 We are down to the final four! After the Rugby World Cup quarter-finals only France, New Zealand, England and Canada remain in contention for the title, with the semi-finals taking place at Eden Park next Saturday.

That took her tally to 20, surpassing the former England captain’s feat of 19 – and you wouldn’t bet against Woodman extending that record in the next round either.

Then the following day Sarah Hunter became not only England’s most-capped player but the most-capped player in women’s rugby history when making her 138th Test appearance in the quarter-final against Australia to move clear of former team-mate Rochelle Clark.

And she marked the occasion by scoring England’s first try against the Wallaroos.

Reign in the rain

We have generally been treated to fine weather during the course of this World Cup but that all changed at Waitakere Stadium on Sunday lunchtime. The rain was torrential ahead of the England v Australia quarter-final – and it stayed that way for much of the first half.

Even when the rain had cleared, the pitch remained damp and it was no surprise that there were a number of handling errors from both sides, albeit that there could have been far more.

The Red Roses played the wet conditions well, keeping it tight and capitalising on their strengths up front to score seven tries through the forwards, including a hat-trick from Marlie Packer.

As well as their famed driving lineout, they also had a clear advantage at the scrum and used that to full effect to reign in the rain.

It’s now onto the last four, where they will face another side with a strong maul in Canada.

The Eagles were clearly fired up at the start and got an early lead, but Canada showed their class in both the close-quarters exchanges and their open-field running as the game wore on to triumph 32-11. They are now the last amateur team standing and will be eager to prove a point against England.

Of course, this North American fixture raises the question of just how good these teams could become if they received more investment from their unions. As it stands, players are juggling full-time jobs and studies with their rugby commitments, storing up holiday days or taking unpaid leave to be able to compete in World Cups and other tournaments.

Both Canada and the USA have done extremely well to reach the standards they have without that investment, but if they are to improve and continue to be competitive at RWC 2025, it’s quite simple: show them the money!

There is no doubting the talent in the New Zealand back-line and they certainly displayed those talents in their big quarter-final win over Wales.

Portia Woodman was both creator and scorer in the victory while the likes of Theresa Fitzpatrick, Ruahei Demant and Ruby Tui proved how dangerous a running team they are, with threats across the pitch. There were some sublime moves in that victory.

Tui later praised the coaching team headed up by Wayne Smith for how they have developed the team’s attacking game since taking charge earlier in the year.

Their semi-final against the French on Saturday at Eden Park is set to be a cracker.

France have yet to deliver an 80-minute performance in this World Cup but they have certainly shown flashes of their potential, with a flurry of second-half tries securing a 39-3 victory over Italy and setting up a semi-final against New Zealand.

Joanna Grisez, a sevens player who made her 15s debut earlier in the tournament, scored a hat-trick in the quarter-final win while Caroline Drouin and Emilie Boulard also stood out in the back-line. Then they turned their team bus into a party bus…

Italy stalwart Manuela Furlan suffered a serious knee injury in a World Cup warm-up against France last month but she battled back to take her place on the bench for the quarter-final and played the last ten minutes of the match.

The full-back/wing and long-term Azzurre captain had said that she would retire at the end of the tournament and it was fitting that she was able to take the field one last time. And then she proceeded to delight some young fans by giving them her boots!

And the quarter-finals lowlight…

In the second half of the New Zealand-Wales quarter-final, a male streaker burst onto the pitch. How can a grown man think it acceptable to not only interrupt an international sporting event but run naked in front of a crowd full of children?

Let’s hope the family atmosphere isn’t ruined by copycat acts as the tournament reaches its climax.

Head to our Rugby World Cup hub page for all the latest from New Zealand.

Previous Rep. Beyer’s GOP challenger says he should be removed from committees over ex-aide’s work with Chinese Embassy
Next ‘Game changer’: Could Elon Musk’s takeover of Twitter serve as this year’s October surprise?