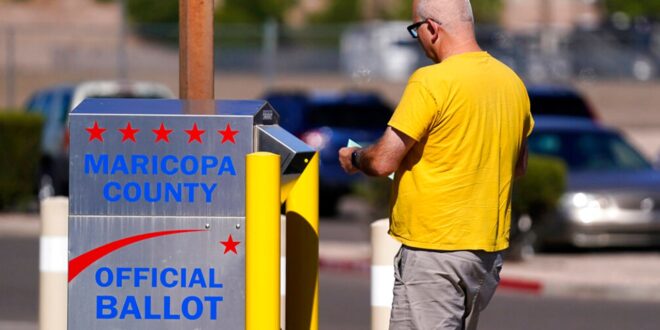 Appearing on CBS’ ‘Face the Nation’ Sunday morning, Jen Easterly, Director of the U.S. Cybersecurity and Infrastructure Security Agency (CISA), said the agency was putting out information to make sure that state and local election officials have the information that they need to protect voting systems and election infrastructure.

Easterly noted that the agency has “no information about specific or credible threats to disrupt or compromise election infrastructure” but warned it is still a “very complex threat environment.”

“You have cyber threats. You have inside threats. You have rampant disinformation,” Easterly said. “And, yes, worryingly, you have threats of harassment, intimidation and violence against election officials, polling places and voters.”

She added: “That has to stop. It is unacceptable behavior. It’s undemocratic. And we all need to work together to ensure that this is a safe and secure election.”

Easterly’s agency, CISA, is the branch of the Department of Homeland Security responsible for securing the U.S.’ cybersecurity infrastructure and coordinating with states on election security.

Easter’s comments came after the DHS and other law enforcement agencies, including the FBI, issued an intelligence bulletin on Friday warning that political candidates, election officials, and the public faced a heightened risk of violence.

Those warnings were underscored by a violent attack on House Speaker Nancy Pelosi’s 82-year-old husband at their San Francisco home early Friday morning.