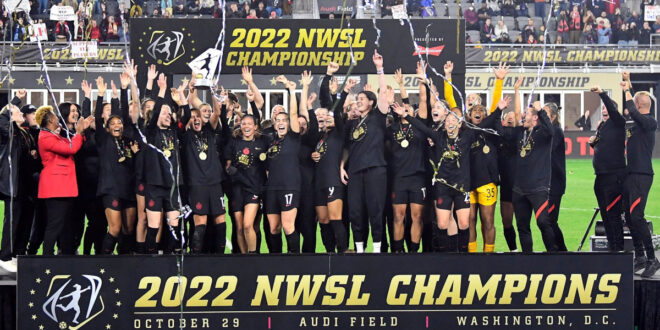 The Portland Thorns feature prominently in the story line that has continued to overshadow NWSL’s on-field product. But lest anyone forget that the Thorns players are second to none when it comes to NWSL royalty.

Portland became the league’s first three-time champion Saturday night, beating the Kansas City Current 2-0 in the league’s title match in front of over 17,000 fans at Audi Field in Washington, D.C. League MVP—and final MVP—Sophia Smith took no time at all to make her mark, scoring the eventual winner at the four-minute mark, as KC’s worst-to-first quest came up one win short.

Portland’s triumph comes amid everything swirling around the club. Top executives have at last been ushered out following the re-established and new revelations in Sally Q. Yates’s investigation into systemic sexual and emotional abuse of players across the league. Portland owner Merritt Paulson has stepped away from duties as CEO as fan pressure reaches a breaking point, but he still actively owns the club despite an outcry for him to sell. He was not present at Audi Field for the final, with club brass instead represented by interim CEO Heather Davis, interim COO Sarah Keane and general manager Karina LeBlanc.

But while it’s impossible—and irresponsible—to separate the soccer from the painful past, it should not be lost what Portland has accomplished on the field this season and across the first 10 years of NWSL’s history. Of the nine NWSL finals, Portland has played in four and won three (the pandemic reduced 2020 to the Challenge Cup and Fall Series). It’s a team for stars old and young. There’s the intrepid leadership of U.S. captain Becky Sauerbrunn and steady presence of all-time international scoring leader and Canadian legend Christine Sinclair. There’s the remarkable story of Crystal Dunn, the U.S. international who gave birth in May and scored a stoppage-time screamer in the semis vs. San Diego to send Portland to the title match. On the other end of the spectrum entirely, there’s Olivia Moultrie, the barrier-breaking 17-year-old who became the youngest player to appear in a final when she came on for stoppage time. And most importantly there’s Smith, the budding 22-year-old U.S. star whose time certainly seems to have arrived.

After scoring the opening goals in the fourth and fifth minutes in the previous two rounds, respectively, KC was dealt a dose of its own medicine Saturday night, with Smith the chief actor. All of the early pressure came from Portland, which won a free kick in the first minute and saw Smith have a great chance blocked three minutes in. But a minute later, Rocky Rodriguez’s through ball wasn’t properly dealt with by Elizabeth Ball, allowing Smith to waltz in behind, round Current goalkeeper Adrianna Franch, tap in the opener and celebrate with a casual Michael Jordan–like shrug.

Smith narrowly missed scoring a second in the 27th minute in sensational fashion, splitting two defenders, dodging two others and then curling a right-footed chance just wide of the far post.

Smith nearly scored at the start of the second half as well, breaking through between two defenders only to hit her shot right at Franch. And while Smith didn’t get a touch on the ball that wound up going in for Portland’s insurance goal, she was heavily involved. Her early run to the near post for Yazmeen Ryan’s cross created havoc and urgency across the KC defense, with the ball going off Franch and Addisyn Merrick for the own goal that all but sealed the result in the 57th minute.

While KC may have come up short, its achievement, too, should not be understated. It’s in many ways a club set to bring the league into the future, with committed owners willing to invest heavily, particularly in the form of a new state-of-the-art, NWSL-specific riverfront stadium (ground was broken earlier this month; it’s due to open in 2024) and a training facility. It reached the final all without the services of experienced NWSL and U.S. stars Sam Mewis and Lynn Williams, who missed the entire season with injuries, and veteran French midfielder Claire Lavogez, who tore her ACL in the first round of the playoffs.

A year ago, KC was 3-14-7, scored a paltry 15 goals total and had a league-worst -21 goal differential. Improvement manifested in the form of a 10-6-6 regular-season mark and a deep postseason run. In the playoffs, the fifth seed beat two of the four sides that finished higher in the standings, including the NWSL Shield winner, OL Reign. There can be no doubt that the upcoming seasons in Kansas City will be bright.

But the standard remains Portland, whose players have operated under circumstances that only they can truly comprehend and yet emerged as worthy champions again. There’s perhaps a further reckoning to transpire at Thorns HQ, with the title sure to do little to dissuade the club’s impassioned fans from demanding complete change at the top, but on the field there is little doubt about what this club is all about.