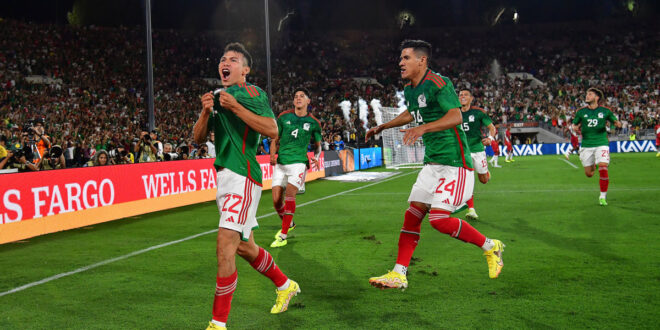 Rosters for the 2022 World Cup aren’t due in to FIFA until Nov. 14, but that’s not stopping Mexico from getting a head start on whittling down its player pool.

On Wednesday, manager Tata Martino revealed a 31-man squad, from which his 26-man group for Qatar will be selected. That final group will try to both extend Mexico’s streak of getting out of the group stage while simultaneously ending the curse of losing in the round of 16. For seven straight men’s World Cups, Mexico has been bounced in the first knockout game, with the fifth game—the quinto partido—remaining ever elusive. After a qualifying campaign that was unspectacular yet effective enough—Mexico finished behind Canada on goal differential (both were 8-2-4) but ahead of the U.S. by three points in the top three of Concacaf’s qualifying table—Martino has honed in on his desired group to take on that task.

It’s led by Napoli star Hirving Lozano, Ajax midfielder Edson Álvarez and Wolves forward Raúl Jiménez and bolstered by veteran goalkeeper Guillermo Ochoa and longtime midfield stalwarts Andrés Guardado and Héctor Herrera. It had long been established by Martino that he would not be bringing Javier “Chicharito” Hernández, 34, despite his 18-goal season for the LA Galaxy in MLS, but there is room, at least for now, for a pair of attackers who seemed like they may miss out. Sevilla winger Jesús “Tecatito” Corona, who suffered a devastating leg injury in August, has made a speedy enough recovery to still be considered, while 21-year-old forward Santiago Giménez, who has a pair of Eredivisie goals and three more in the UEFA Europa League for Feyenoord after a standout run at Cruz Azul, has also been included.

Before the World Cup, Mexico is scheduled to play friendlies in Spain against Iraq on Nov. 9) and Sweden (Nov. 16) as final tune-ups. At some point before Nov. 14, the final five cuts will be made to get Martino down to his official World Cup squad.

Mexico was drawn into a difficult group at the World Cup, where it will play Argentina, Poland and Saudi Arabia. The first match comes against Robert Lewandowski’s Poland on Nov. 22, followed by a date with Lionel Messi and La Albiceleste on Nov. 26. El Tri close the group stage against the Saudis on Nov. 30.

“On paper, it’s a tough group,” veteran defender Héctor Moreno said last month. “Argentina is one of the candidates to win the whole tournament. But you still have to play those games. In the last World Cup, you never would have thought we would beat Germany, and then lose to Sweden, either. We have to focus on Poland, and then after that, we have to focus on Argentina and Messi, the best on the planet. We are always going to have big challenges at this level, and those are two big challenges, but I think we will be ready.”

Here is the 31-man group from which Mexico’s World Cup roster will be selected:

Previous Liverpool 1-2 Leeds: Jurgen Klopp says his side need to find consistency in top-four fight
Next Adele reveals the one musical that could lure her to Broadway