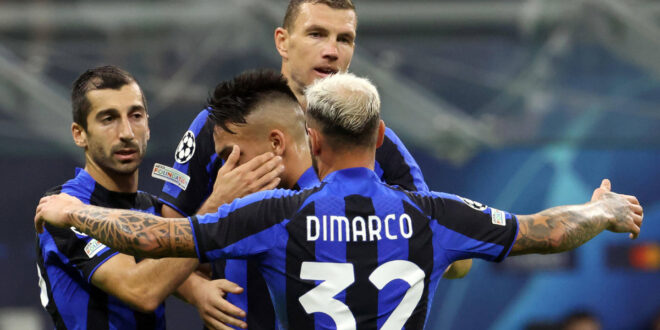 Before Barcelona even kicked the ball at Camp Nou on Wednesday, it knew that its Champions League fate was already sealed.

Inter Milan’s 4–0 win over Viktoria Plzen in one of the day’s early matches clinched the Italian side’s place in the last 16 and ensured that Barcelona will be dumped in to the Europa League’s knockout phase as a third-place group finisher behind Bayern and Inter. With Inter six points clear of Barcelona, Xavi’s side—before ultimately losing 3–0 to Bayern—could have done no better than match the Nerazzurri on points, and by virtue of Inter’s win and draw against Barcelona in group play, it held the head-to-head tiebreaker.

Barcelona joins Juventus as traditional powers not to make it out of the group stage, though Barça’s ouster comes from a much more difficult group than what Juventus faced. The Bianconeri were bested by PSG and Benfica and dropped a result to Maccabi Haifa en route to its first failure to get out of the group since 2013-14.

This marks Barcelona’s second straight failure in the group phase, with the club finishing behind Bayern and Benfica last season. Its Europa League voyage ended in the quarterfinals. After successfully navigating Napoli and Galatasaray, Barça was dumped out by eventual champion Eintracht Frankfurt after a wild second leg at Camp Nou.

The failure is exacerbated by what Barcelona did this summer to try to improve after a crisis-laden 2021-22 season. It sold off parts of different arms of the club in order to be able to spend lavishly, landing the likes of Robert Lewandowski, Raphinha and Jules Koundé, and while performance has improved and it remains a threat to challenge Real Madrid for La Liga’s title, expectations went well beyond group elimination from the Champions League.