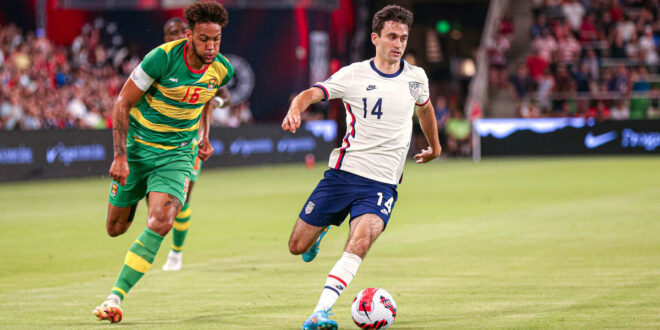 The U.S. men’s national team’s first World Cup match is less than a month away, which puts Luca de la Torre in a tough spot.

Celta Vigo announced Friday that de la Torre, the U.S. midfielder who improved his situation with the national team considerably throughout the spring, is out for around three weeks with a “grade I and I fibrillar tear in the biceps femoris of his left leg”—a hamstring tear—something that puts his World Cup participation in doubt.

The 24-year-old San Diego native has found playing time hard to come by as is in La Liga after making a summer transfer from relegated Dutch side Heracles, where he was a lineup fixture. In five league appearances this season, all as a substitute, de la Torre has totaled 50 minutes of playing time. If the club’s injury timetable holds, he won’t be able to accrue any more before the U.S. World Cup roster is set, which could force manager Gregg Berhalter to look elsewhere for midfield reinforcement.

Tyler Adams, Weston McKennie and Yunus Musah have emerged as the U.S.’s first-choice trio in the center, but de la Torre came on strong at the end of World Cup qualifying and emerged as the next in line in the pecking order. Should he miss out on the World Cup, it could open the door for the likes of Cristian Roldan—who is currently in the camp arranged for MLS players whose seasons are over—James Sands, Johnny Cardoso and other players perceived to be on the roster bubble. Berhalter will make his final decisions—which are subject to change until FIFA’s Nov. 14 deadline—in a televised reveal party on Nov. 9 in Brooklyn. The U.S.’s first match in Qatar is Nov. 21 against Wales.

The injury situation is percolating for the U.S. Adams missed Leeds United’s match vs. Fulham last weekend with a muscle injury, which manager Jesse Marsch deemed minor. He may not be fit to face Liverpool this weekend, though. Beyond that, goalkeeper Matt Turner was forced to miss Arsenal’s Europa League match vs. PSV Eindhoven on Thursday with a groin injury that is also said to be minor.