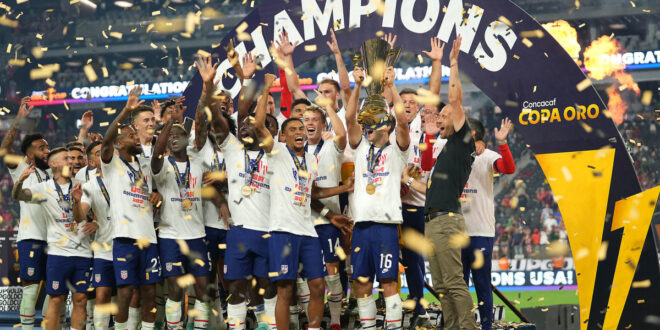 Additional venues will be announced at a later date. The 2023 Gold Cup decider will be the first significant soccer game staged at SoFi, which opened two years ago and serves primarily as the home of the NFL’s Rams and Chargers (MLS and Liga MX used it for a couple of friendlies in August). SoFi was the site of Super Bowl LVI in February and will be used during the ’26 World Cup and ’28 Olympics.

The Gold Cup won’t overlap with next summer’s other major tournament, the Women’s World Cup. That will take place July 20 to Aug. 20 in Australia and New Zealand.

Qualifying for the ’23 Gold Cup is already underway through the Nations League, Concacaf’s secondary international event. Split into three tiers, the Nations League will send 12 sides directly to the Gold Cup’s group stage. As a League A entry, the U.S. must finish in the top two of its three-team group, which also includes El Salvador and Grenada, to book passage. The Americans are 1-0-1 after two games and will conclude group play at the end of March.

The four third-place teams in League A, along with eight additional nations from B and C, will contest the single-elimination Gold Cup preliminaries June 16–20. The three survivors will join guest Qatar to fill out the Gold Cup’s 16-team group stage, which will be played June 24 to July 4.

It’ll be another crowded summer for Concacaf, which plans to stage the Nations League final four in early June, just a few days before the Gold Cup preliminaries. The confederation relinquished Nations League dates last month to allow its four World Cup qualifiers to play friendlies outside the region. As a result, the Nations League group stage finales were pushed back to March, leaving early June as the next open date for the final four.

The pandemic led to similar congestion last year, when the inaugural Nations League semifinals and final were staged a month before the Gold Cup. U.S. coach Gregg Berhalter chose to split his roster, giving most of his European-based players a run in the Nations League before resting them ahead of a busy World Cup qualifying campaign. He then deployed an MLS-heavy lineup in the Gold Cup.

It seemed counterintuitive to omit the program’s biggest names from the far more prestigious competition, but it made sense given the timing, and it wound up working out—the U.S. won both trophies. Nevertheless, Concacaf hopes to find more separation between its two men’s tournaments in the future. In addition, next year’s Concacaf Champions League finals are scheduled for May 31 and June 4.

Next summer’s Gold Cup will see the U.S. try to repeat as regional champion for the second time (2005 and ’07). The Americans have lifted the Gold Cup seven times. That’s good for second behind Mexico, which has claimed eight Gold Cup trophies and 11 Concacaf championships overall.