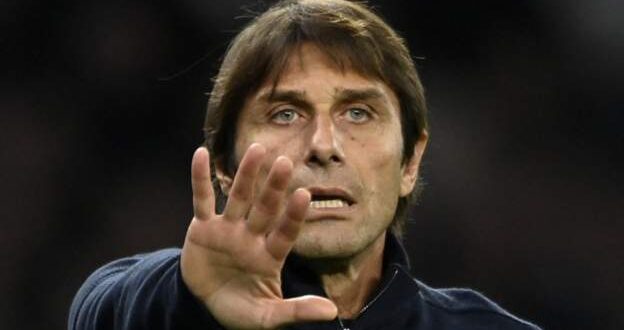 Antonio Conte: Tottenham boss says it is ‘impossible’ for VAR to make mistakes

Tottenham boss Antonio Conte says it should be impossible for mistakes like the one he claims happened this week to be made by the video assistant referee (VAR).

Conte was sent off after a goal in stoppage by Harry Kane in a 1-1 Champions League draw with Sporting Lisbon was ruled out for offside.

Had Kane’s goal been allowed Tottenham would have qualified for the last 16.

“What happened in the last game was incredible,” Conte said on Friday.

“You score, you are already qualified for the next round, you are celebrating and then you have to stay for five minutes to look at the situation with VAR and you take the decision and you don’t know if it’s right or wrong.

“For me it’s impossible to make a wrong [decision] with VAR and also to [take] four, five or six minutes [to make it].

“To stay there five or six minutes already means you have confusion in your mind. It’s incredible.”

After the game on Wednesday, Conte was so emotional that his post-match news conference ended after one question.

On Friday, the Italian did not hold back as he accused VAR of taking emotion out of the game and joked he could make better decisions from his own home.

“This is not football in this way also because you cut the emotion, the emotion of everybody and especially the players because you don’t know,” added Conte.

“It happened but it only happened when they want it to happen. This is the difference.

Tottenham, who are third in the table, visit Bournemouth on Saturday (15:00 BST) looking to return to winning ways after three matches without a win in all competitions.

They visit Marseille on Tuesday (20:00 GMT) for their sixth and final Group D game in the Champions League. Tottenham will go through to the last 16 if they avoid defeat.

Meanwhile, Spurs have been fined £20,000 by the Football Association after admitting they failed to ensure their players conducted in an orderly fashion during last Sunday’s 2-1 defeat by Newcastle.

The flashpoint came in the 31st minute after a Callum Wilson goal was awarded following a lengthy VAR check for a foul and handball.