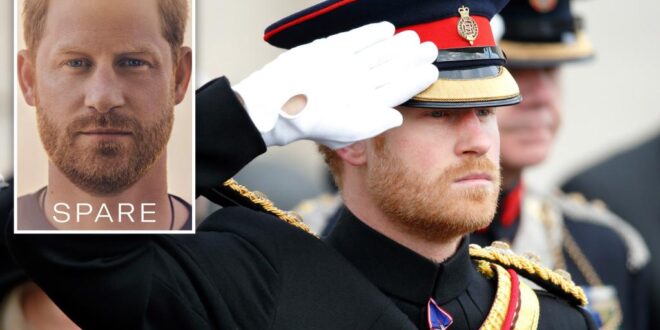 Set for a Jan. 10 release, the book’s enigmatic title, “Spare,” has prompted questions about its meaning.

The term “spare” refers to the Duke of Sussex’s longtime label as the backup king, should his older brother Prince William — “the heir” — not make it to the throne.

Royal expert Nick Ede further explained to the Daily Mail how the memoir’s name “is not only provocative, but also lends into Harry’s sense of humor too.

“Although it is a bold choice, it’s a brave one and it sets out immediately that this book will be anything but showing that Prince Harry is a spare,” Ede said.

He continued, “The use of the singular title is one of empowerment and strength. Using ‘Spare’ is a way of reclaiming it and making it a powerful, empowering tool for himself and for the reader.”

The book cover shows a close-up portrait of Harry, 38, staring straight into the camera — almost as if he’s staring into the soul of the reader.

“It doesn’t rest on a stylized imaged but one that is him looking honestly into the camera ready to bear his vulnerabilities and story to the media,” he said.

He continued, “The detailed close-up image of Harry shows him as a strong, handsome man with an earnest face looking point-blank at the camera.

“[Harry] is not suited and booted or too polished, with his tee and now-familiar leather necklace on show. It’s a strong commanding image of a man who’s been through a lot and who’s here to tell that story of grief and love in equal measure,” the royal expert stated.

Harry was reportedly paid $20 million for his book by his publisher Penguin Random House.

A spokesperson from Penguin Random House said that he will “support British charities with donations from his proceeds from ‘Spare.’”

“The Duke of Sussex has donated $1,500,000 to Sentebale, an organization he founded with Prince Seeiso in their mothers’ legacies, which supports vulnerable children and young people in Lesotho and Botswana affected by HIV/AIDS,” Penguin Random House stated.

They added that the father of three will also donate to the nonprofit WellChild in the amount of $347,000.