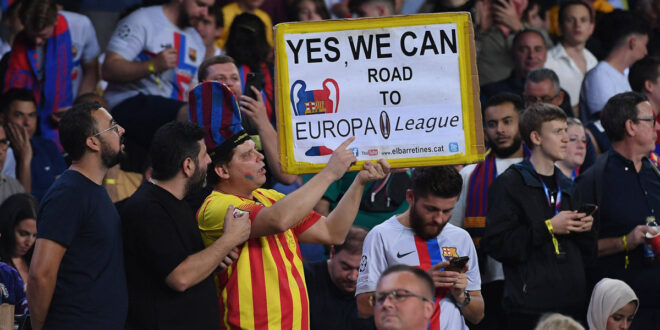 Wednesday’s 3–0 defeat would have been bad enough for Barcelona if this had just been another defeat to Bayern Munich, another game lost in the same way all the others have been, by a side bossing possession and being picked off on the break by smarter opponents. But far worse could be the financial consequences of a second successive group-stage exit from the UEFA Champions League, something that had already been confirmed when Inter Milan beat Viktoria Plzen 4–0 earlier in the day. That meant Barcelona was locked into a third-place finish, dropping into the Europa League’s knockout phase.

The wave of summer signings at Barcelona has not had the desired, immediate effect, and the impact could be devastating. The club’s last published accounts showed debts of €1.3 billion, a result of the pandemic coupled with the grotesque mismanagement and panic that followed the loss of Neymar to Paris Saint-Germain in 2017, as the club sought desperately to reassert itself by buying stars.

At the end of June, just before the accounts for 2021–22 were closed, 10% of the club’s La Liga TV rights for the next 25 years were sold to U.S. financiers Sixth Street for €267 million. A €160 million program of summer spending then began, with a further 15% of those TV rights then sold for €400 million. The cryptocurrency firm Socios.com paid €100 million for a quarter of Barça Studios, the club’s in-house production company. Another quarter was then sold for another €100 million to the Catalan businessman Jaume Roures and his Orpheus Media firm.

Philippe Coutinho and Pierre-Emerick Aubameyang were sold for a total of around €35 million. A fee of roughly €20 million was eventually agreed upon with Atlético Madrid for Antoine Griezmann. Others were offloaded to clear their wages from the books: Miralem Pjanić, Riqui Puig, Dani Alves, Neto and Francisco Trincão were released on free transfers; Samuel Umtiti, Sergiño Dest and Clement Lenglet were loaned out. Frustratingly for Barcelona, Frenkie de Jong refused both to go and to accept an arbitrary wage cut.

But still, that wasn’t enough. So Barcelona invoked the Article 92 of La Liga’s budget rules, which allows a club to be advanced money on a temporary basis. Laporta and club treasurer Ferran Olivé both made payments of €2.75 million, which finally allowed Barcelona to register all its summer signings.

In Laporta’s first stint as president, when he inherited the ostensibly similar financial chaos that resulted from the spending spree that followed the loss of Luis Figo to Real Madrid, he spoke of generating a virtuous circle: buy good players, win games, attract interest and revenue, buy more good players. But this is not quite the same situation.

Back then, almost two decades ago, Barcelona was still essentially a parochial club: There were a lot of easy commercial gains to be made. Back then, it didn’t even have a shirt sponsor. Now, stadium naming rights as well as the shirt have been sold to Spotify, which led to players wearing Drake’s logo in the recent Clásico defeat. And back then, the Barcelona that rose to become one of the greatest sides of all time was inspired by seven players who had come through the club’s La Masia academy.

According to the club’s financial vice president, Eduard Romeu, the loss last year, excluding selling off chunks of the club, would have been €106 million. This year, losses would have been €210 million—and that’s before considering the fact that Sixth Street is now owed €41 million. Salaries deferred during the pandemic are soon due. Roughly €100 million for the transfers of Coutinho, Pjanić and Neto are due before the end of the season as well.

All of which is to say that the situation is fraught. Barcelona, it has been reported, budgeted to reach the quarterfinal of the Champions League this season. That brings €20.2 million more in prize money than going out in the group stage. In addition, every point in the group stage is worth €930,000. Given how enormous the debt is and compared to what Barcelona will make based on its coefficient (€34.1 million) and market pool (which is dependent on a variety of factors), perhaps €20 million or so doesn’t sound like too much. Then again, if directors keep having to take emergency loans, then every Euro counts.

Club supporters have already voted Laporta the right to sell a share in the club’s licensing and merchandising arm, while Roares has hinted at selling off stakes in the club museum or its future profits. But there is a limit to what can be sold off. At some point, it effectively becomes impossible for the club to make a profit—which may explain why Barcelona remains one of three sides committed to the Super League. One of the other two, Juventus, has already exited this season’s Champions League.

Barcelona fans chanted against UEFA Wednesday, calling the European governing body of the sport a “mafia,” which is as spectacular a case of refusing to take responsibility as is ever likely to be found. Barcelona has brought this crisis on itself—and it’s a crisis that is going to get worse.