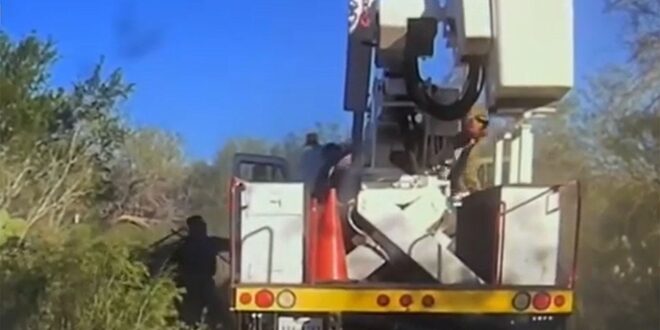 More than a dozen illegal immigrants were stopped in a stolen truck in Texas after a police chase this week, one of a slew of chases and smuggling attempts that law enforcement is contending with amid a historic border crisis.

Video obtained by Fox News shows the bucket truck leading officers in Encinal, Texas, on a chase until they go off the road. Migrants then flee as officers draw their weapons. Authorities were able to apprehend 11 of the 15 migrants. The driver was one of those who evaded law enforcement.

It’s one of a series of migrant smuggling operations that authorities have thwarted, with migrants crammed into tight spots with little air or room to move. Local authorities say they are averaging a police chase a day.

Texas Department of Public Safety this week found more than 100 migrants being smuggled in a dump truck in one incident. In another, authorities stopped a vehicle attempting to carry more than 60 illegal immigrants.

Illegal immigrants form a line after a driver was arrested by law enforcement.
(@LtChrisOlivarez / Twitter)

Images from that scene show dozens of migrants, all young males, climbing out of the back of a dump truck.

Meanwhile, the number of migrants crossing illegally shows little sign of slowing overall. A group of 300 migrants crossed into Eagle Pass, Texas, on Thursday morning. The migrants were mostly single adult men from Cuba, something that has been seen every day this week so far.

There were more than 227,000 migrant encounters in September, a new record that sent the number of encounters for fiscal year 2022 up to more than 2.3 million.

Republicans have hammered the Biden administration for the crisis, which they attribute to the rolling back of Trump-era policies like the “Remain in Mexico” policy and border wall construction. The Biden administration, meanwhile, has focused on a strategy that targets “root causes” like poverty and violence in the region while at the same time promoting cooperation in the hemisphere.

Earlier this month, the Biden administration announced a cooperative border strategy with Mexico that sees resources flooded to the border as well as increased check points. It also involves expanding Title 42 expulsions to include Venezuelan nationals — whose numbers have spiked in recent months.

Customs and Border Protection, announcing the record September numbers, claims that that policy is already having an effect in the first weeks of October.

“Over the past week, the number of Venezuelans attempting to enter the country fell more than 80 percent compared to the week prior to the launch of the joint enforcement actions,” CBP Commissioner Chris Magnus said in a statement. “While this early data is not reflected in the latest report, it confirms what we’ve said all along: when there is a lawful and orderly way to enter the country, individuals will be less likely to put their lives in the hands of smugglers and try to cross the border unlawfully.”

Nate Foy currently serves as an FOX News correspondent based in New York City. He joined the network in February 2022.