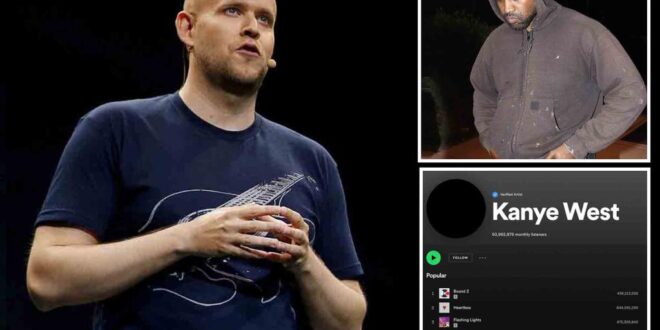 Spotify CEO Daniel Ek has attacked Kanye West for his “just awful” anti-Semitic outbursts — but insisted he has no plans to yank his music from the streaming giant.

Responding to calls to pull the artist now known as Ye from his site, Ek insisted that it would only be an issue if the fallen fashion mogul’s “just awful comments” were broadcast on Spotify, such as in a podcast.

“It’s really just his music, and his music doesn’t violate our policy,” Ek said of Ye’s material on Spotify.

“It’s up to his label, if they want to take action or not,” said Ek of the decision over Ye’s groundbreaking catalog of music.

If such a request was made, “Obviously we’ll respect their wishes,” insisted Ek.

Universal Music’s Def Jam label owns the copyright to West’s recordings from 2002 through 2016, with its record contract expiring last year with “DONDA.”

Without calling for the rapper’s music to be removed, the label stressed: “There is no place for antisemitism in our society.”

Hollywood power broker Ari Emanuel was among those calling for music services to yank Ye after the rapper promoted anti-Semitic conspiracy theories in interviews and on social media, starting with a tweet saying he planned to go “death con 3 On JEWISH PEOPLE.”

Since then, Ye has been dropped by talent agency CAA as well as giant fashion brands like Balenciaga and GAP.

On Monday, he lost his biggest partnership, Adidas — a painful answer to his claim days earlier that “I can say anti-Semitic things, and Adidas can’t drop me. Now what?”

The end of his Yeezy partnership instantly ended his billionaire status.

Ek has famously stood up for free speech on his site, including backing star podcaster Joe Rogan when aging rocker Neil Young gave a him-or-me ultimatum about the UFC commentator’s then-controversial chats about COVID.

However, Spotify has faced backlash when it punished musicians for their personal misconduct.

The streaming service removed R Kelly’s music from its playlists and recommendations in 2018 following allegations of sexual misconduct. It walked back the policy after other artists threatened boycotts, giving users a mute button to block particular artists, instead.