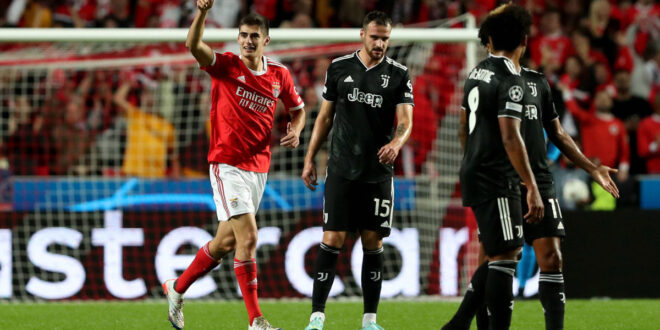 The final score may not really have been reflective of the game, but the result was just and telling. Benfica beat Juventus Tuesday in the Champions League, 4—3, but it had dominated for such long periods that midway through the second half it seemed possible that Roger Schmidt’s side could have won by five or six. Juventus’s late rally, though, could neither disguise how poor it was for the first 70 minutes, nor could it prevent the club’s first exit in the group stage since 2013-14—and there’s still a match to play. An organization in decline is continuing on a wayward trajectory.

Last season was bad for Juventus, but this season has been worse. As it rallied to finish fourth in the spring, there was at least the background thought that manager Massimiliano Allegri was sorting out the problems caused when he was relieved of the job in 2019. That excuse has been harder to maintain this time around, though. Juventus sits eighth in Serie A, 10 points behind imperious leader Napoli, while form in Europe has been desperate and poor. It may have been beset by injury—a fully fit Federico Chiesa and Paul Pogba perhaps could have papered over some cracks—but the overall vibe about the club has been off.

Defeat to Benfica confirmed Juventus’s absence from the knockout stage—a third-place finish and drop down to the Europa League’s second phase is still possible—but the overall decline has been gradual (last-16 defeats to Lyon, Porto and Villarreal in the last three seasons) and the damage this season had been done long ago. There was the first half away to Paris Saint-Germain when Juventus was lucky only to be 2—0 down, and ended up losing 2—1. Then there was the 2—1 home defeat to Benfica, the advantage of taking a fourth-minute lead soon lost. And two weeks ago there was the humbling 2—0 defeat away to Maccabi Haifa.

But in truth, the damage was actually done when Allegri was first moved on. He had won five league titles in five seasons and twice taken Juventus to the Champions League final. His football was deemed insufficiently modern to carry Juventus to the European glory it craved, and so the decision was taken to replace him with the more progressive Maurizio Sarri. That might have worked, had the club not the previous season made the incomprehensible signing of Cristiano Ronaldo, a player who could never fit in a Sarri system.

Juventus still won the league, but the football deteriorated, while the financial burden of carrying Ronaldo affected the shape of the rest of the squad. Sarri was replaced by the wholly inexperienced Andrea Pirlo and Juve’s run of nine straight league titles came to an end. Ronaldo was offloaded and Allegri restored, but his football had not become more modern in the two years he had been away.

And yet Juventus, dismally mismanaged at the board level, is one of three clubs that is yet to withdraw from the Super League project, that dares to continue to preach to the rest of Europe about how it can only possibly keep going in a competition that guarantees it even more revenue. Having squandered one position of extraordinary strength, it now demands elevation to another.

The Super League itself seems to be building to an attempted relaunch. Legal action against UEFA’s alleged monopolistic position goes on, with the new CEO of the company backing the Super League, Bernd Reichart, talking of a blank slate and fan consultation. The closed element of the proposed league appears to have been abandoned. And the irony now is that Juventus is already out of this season’s Champions League and Barcelona will probably go out on Wednesday: two of the three remaining rebel clubs are struggling to make the case that they deserve to be in a Super League in the first place.

But defeat to Benfica, for all the long-term causes, for all the blame due to boardroom mismanagement, was also caused by short-term failings. There was a weird diffidence to Juventus, a laxity, that meant it rarely pressed Benfica, which was able to control the play almost uncontested. The first goal, glanced in by 18-year-old António Silva, had been signaled long before it arrived after 17 minutes, and resulted from the failure to put any pressure on Enzo Fernández before he delivered his cross.

A Moise Kean equalizer might have stirred Juve into resistance, but it is not just a slack team these days, it is an unlucky one. Almost immediately, Juan Cuadrado was the victim of an extremely harsh penalty call as the ball ricocheted onto his arm. João Mário converted from the spot. It was his cross that brought the third 10 minutes before the break, with Rafa Silva gleefully flicking in with the inside of his heel.

The same scorer dinked a neat fourth early in the second half. At that point the game seemed done, but the arrival of 19-year-old Samuel Iling-Junior from the bench added unexpected drama. His crosses from the left brought goals in the space of three minutes for both Arkadiusz Milik and Weston McKennie and, from nowhere there was an edgy finish for Benfica.

In reality, though, the gulf between the sides was vast. Benfica deservedly progresses to the last 16, while Juventus got exactly what its performances in the group stage merited.