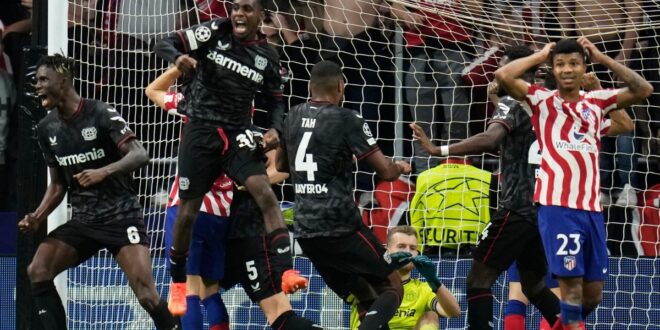 Atletico Madrid Knocked Out of UCL After Bizarre Stoppage-Time Drama

Chaos broke out in the closing moments of Wednesday’s Champions League group-stage match between Atlético Madrid and Bayer Leverkusen that saw Atléti awarded a penalty in stoppage time, only for the spot kick to be saved and the game end in a 2–2 draw.

Needing a win and three points to keep its hopes of advancing out of the group stage, Atlético fell behind twice, but was able to claw even thanks to goals from Yannick Carrasco and Rodrigo de Paul. The Spanish side then ended up with one final opportunity to break the tie in stoppage time on a corner kick.

Nothing came out of the last-ditch attempt and the final whistle sounded, seemingly eliminating Atlético from the competition. However, just a few moments later the referee signaled for a VAR check, opening the door ever so slightly for Madrid to get another chance.

Atlético would get that opportunity just seconds later when the referee called a hand ball on Leverkusen, awarding Atléti a penalty kick.

Carrasco, who had already found the back of the net in the 22nd minute, stepped up to take the attempt, but saw his low shot saved by Leverkusen goalkeeper Lukas Hradecky. The rebound came back to Atlético’s Saúl Ñíguez, but the headed strike crashed against the crossbar, bouncing around until the ball eventually went out of bounds.

The second, and last, final whistle sounded shortly after, signaling the end of Atlético’s run in the UCL this season.

The bizarre series of events ultimately resulted in Atlético’s first group-stage exit in five years. Though the club will play a final match against Porto next Tuesday, the gap to second place in Group B remains at four points, leaving the Spanish side without a chance to make up ground before the round of 16.