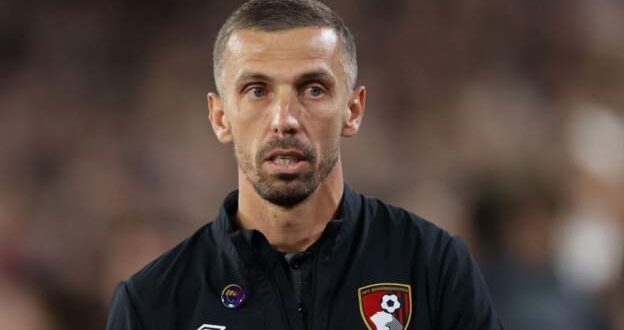 Bournemouth caretaker boss Gary O’Neil said video assistant referee decisions are “getting ridiculous” after his side were beaten 2-0 by West Ham.

O’Neil was unhappy as Kurt Zouma scored a glancing header for the first goal despite the ball having hit the hands of Hammers’ defender Thilo Kehrer.

West Ham were then awarded a penalty late on, which Said Benrahma converted.

“Since I’ve been here there’s been 10 serious VAR checks and none have gone our way,” said O’Neil.

The Cherries boss, who also felt his side should have been awarded a penalty of their own when the ball struck Ben Johnson’s arm at close range, was booked for remonstrating with the officials after Zouma’s goal.

It came in the 45th minute when West Ham had a corner from the right and Kehrer went for a header but, with his eyes closed and his hands tight in front of him, the ball hit his hands.

Bournemouth defender Chris Mepham did not get much distance on a clearing header, and when West Ham’s Tomas Soucek headed it towards goal the ball glanced off the heads of firstly Flynn Downes and then Zouma before going into the net.

The goal was allowed to stand after a VAR check because it was deemed to be accidental handball that did not directly lead to a goal.

West Ham’s late penalty given for handball against Jordan Zemura was awarded, again after a lengthy VAR check, because the defender’s arms were judged to have been in an unnatural position.

“I thought a foul in the build-up was possible just before the handball,” added O’Neil. “It was a cute one but we were penalised at Fulham for Jefferson Lerma fouling [Aleksandar] Mitrovic.

“It [Zouma’s goal] is a blatant handball. His hand moves towards the ball. I’m not surprised because it’s getting ridiculous.”

What is the handball rule?

When deciding a handball decision referees have three key considerations:

For accidental handball in the build-up to a goal:

Handball law ‘all over the place’ – Shearer

Former Burnley manager Sean Dyche and ex-England defender Jamie Carragher felt Zouma’s goal was correctly awarded while in the post-match interview West Ham boss David Moyes said he had not seen the incident again and so could not comment.

Ex-England striker Alan Shearer wrote on Twitter that “the handball law is all over the place – it’s an utter mess”.

O’Neil was also unhappy with West Ham’s second goal as a VAR check gave them a penalty after Zemura slid in trying to stop a cross but the ball hit his arm.

The Cherries boss said he spoke to referee David Coote about it after the game and that the pair viewed the incident differently.

“He says Zemura’s arm was in an unnatural position, I disagree with that,” added O’Neil.

“His arms are propelling when he’s sliding in, they were on the way back down. He’s not trying to gain an advantage. These things are going against us.

“On the goal he said his [Kehrer’s] arm was in a natural position. I disagree. They’re both at his stomach and move to the ball. There was one I haven’t seen with Ben Johnson handling, we didn’t get as well.”

What do you think?

Oops you can’t see this activity!

To enjoy Newsround at its best you will need to have JavaScript turned on.

Oops you can’t see this activity!

To enjoy Newsround at its best you will need to have JavaScript turned on.