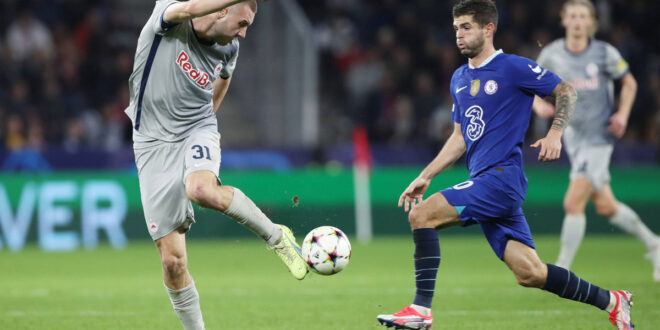 Pulisic assists on Havertz stunner for Chelsea vs Salzburg (VIDEO)

Handed a rare start for Chelsea, U.S. men’s national team star Christian Pulisic made sure to have a hand in the outcome.

Pulisic assisted on Kai Havertz’s spectacular winner in the 2–1 victory, which secured Chelsea’s place in the Champions League knockout stage with one group match to spare. It completed a furious turnaround for Chelsea, which had one point from its first two matches (at Dinamo Zagreb, home vs. Salzburg) before sweeping AC Milan home and away.

In Salzburg, the Blues led on Mateo Kovačić’s strike after a failed clearance, only to concede to Junior Adamu three minutes into the second half. That set the stage for Chelsea, which had been denied repeatedly by Salzburg goalkeeper Philipp Köhn, to seize the three points. Pulisic, who operated on the right side opposite Raheem Sterling on the day, drew three defenders before turning and laying off a short cross to Havertz. The German international settled before curling a left-footed blast under the crossbar and in for the winner. The assist was Pulisic’s eighth of his career in the Champions League.

Pulisic’s status at Chelsea has been an ongoing issue, with the U.S. player largely reduced to a reserve role this season, first under Thomas Tuchel and then under current manager Graham Potter. Since starting and scoring on Oct. 8 against Wolverhampton, Pulisic either came off the bench or was an unused substitute in each subsequent match before Tuesday.

Potter had recently commented on Pulisic’s situation, indicating that starts were on the horizon.

“With Christian I would say he has been fantastic around the place, been really good with teammates, contributed against Wolverhampton Wanderers. He is pushing for a place, pushing for a start,” Potter said. “Things change quickly in football and he needs to be ready.”

Previous DOJ ‘stonewalling’ requests for details on implementation of Biden’s ‘federal election scheme’
Next The new Motorola Razr has arrived in Europe, but there’s no release date yet