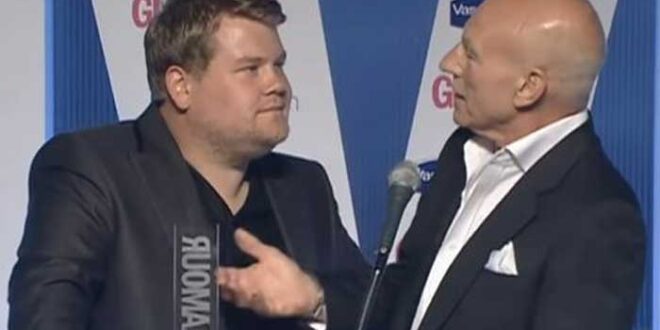 James Corden and Star Trek actor Sir Patrick Stewart once left the onlookers shock as they involved in a verbal tussle at an awards ceremony.

It all kicked off when James hosted the Glamour Women of the Year event in front of an audience of showbiz names including Cheryl Cole, Billie Piper, Christine Bleakley and Lily Allen when the spat took place.

The drama unfolded when theatre veteran Sir Patrick got up on stage to present a gong for Film Actress of the Year and criticised Corden’s hosting techniques.

“I want to speak to James here, it is James isn’t it?” he began, eliciting a laugh from the audience.

He then accused the comedy star of standing at the back of the stage with his hands in his pocket looking like ‘he wished he could be anywhere but here’ when winners came up to collect their gongs.

James Corden made headlines last week when it was revealed he’d got himself banned from a restaurant in New York, following an argument about eggs. After apologising profusely, he was reportedly unbanned and even addressed it on last night’s Late Late Show.