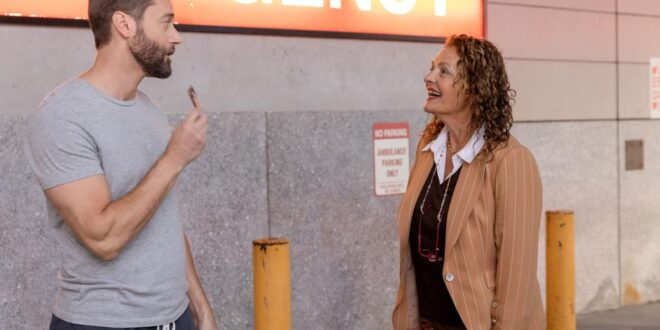 ‘I still talk to him’

“Jimmy was loving and Ryan is like that,” Turturro, 60, told The Post, alluding to “The Sopranos” star James Gandolfini, mob boss Tony Soprano and kid brother to spunky Janice (Turturro) on the HBO drama.

“I can’t say enough nice things about him as a person an an actor,” she said about Eggold. “He’s very open and makes everyone, from A to Z, feel at home.”

In Tuesday’s episode (10 p.m.), New Amsterdam medical director Dr. Max Goodwin (Eggold) comes face-to-face with Callie “Get Your Crash Cash” Cruz (Turturro) after witnessing a traffic accident at a dangerous intersection in which two people are injured. Callie is, on the surface, an ambulance-chasing lawyer on par with Bob Odenkirk’s sketchy Saul Goodman (“Breaking Bad”/”Better Call Saul”) — but, as the episode evolves, we learn she’s got a heart of well-intentioned gold beating underneath her wacky, over-the-top exterior as she and Max fight City Hall to fix the intersection and make it safer.

“I felt like I was doing theater,” said Turturro, who’s recurred on two other NBC series, “The Blacklist” (Heddie Hawkins) and “Law & Order: SVU” (Judge Felicia Catano). “Theater is about team, and we lose that sometimes [in the TV industry]. Without the team, you have nothing and, FYI, without the crew there would be no show — and Ryan is someone who knows that. I’ve had wonderful times on other sets, but [Ryan] was a little special to me.

“I really have to give him kudos for being so kind.”

Turturro, who’s no slouch in the kindness department herself, was talking to me over the phone while sitting on the patio of a close friend.

“Right now I’m at my friend Edie’s house,” she said, alluding to Edie Falco, aka Carmella Soprano. “I stay over and when I come into the city. She’s a great person and great actress and an amazing friend. We grew up similarly, in the city, and we go way back in our souls.

“I try to stay in touch with everybody I can,” she said, alluding to her “Sopranos” family. “Every now and then we talk and I feel like it’s the cousins you haven’t seen for four years. It’s like, ‘Oh my God, I miss you!’ Jamie-Lynn [Sigler, now starring on ABC’s “Big Sky”] is another beautiful soul. Oh my god, you gotta see her kids. They’re so cute!

“Working on ‘The Sopranos’ was like falling in love and having that great memory,” she said. “I miss my Jimmy, my James [who died in 2013]. I talk to him, though. I talk to him all the time. I do. James and I have a whole relationship going on. I knew him from 1992 and we used to fight back then, not really fight, but we were like husband and wife. I fell in love with him the first time we met; I felt like we were kindred spirits. I was like, ‘Listen, you’re not the boss of me, mister!’ and I used to drive him crazy.

“One thing about Jimmy is that he was always thinking about someone else and that was his kindness,” she said. “He would do things like give money to someone if they were going through a hard time but not say it was from him. He was always helping people.

“When I was in the hospital after having some emergency surgery [during the ‘The Sopranos’] … I think that night everyone was flying out [to LA] for the Emmys and Jimmy had to get on a plane. He ran over to the hospital and was like, ‘Are you OK?’ I’m like, ‘I’m fine’ and he said, ‘Well, you stay put.’ I’m like, ‘I’m not staying put’ ... that was the year we all got on stage and we won [an Emmy].