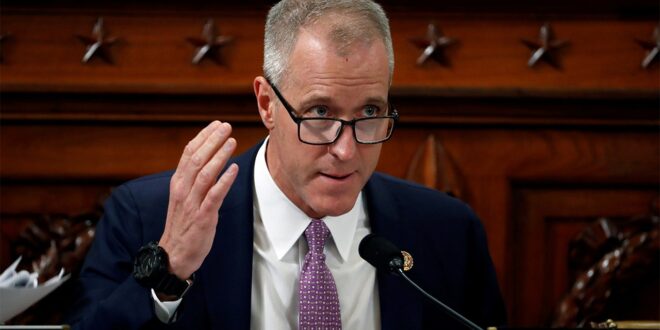 The chairman on the Democratic Congressional Campaign Committee may be out of Congress soon, as Rep. Sean Patrick Maloney, D-N.Y., finds himself in a race that the Cook Political Report has changed from leaning Democrat to a “toss up.”

Maloney is running against Republican New York Assemblyman Mike Lawler in New York’s 17th congressional district, which includes the Hudson Valley. Maloney currently serves in New York’s 18th district, but opted to run for the 17th district seat after redistricting changed the state’s congressional map. Lawler, who is from and represents Rockland County in the Assembly, said this plays in his favor.

“He doesn’t know anybody there,” Lawler told “America’s Newsroom” on Monday, stating that 75% of the 17th district is new to Maloney, while his county makes up 42% of the district.

“And voters recognize that he’s not addressing the issues of concern: crime, inflation, a porous southern border,” Lawler added. “Why? Because he’s responsible.”

A spokesperson for the Maloney campaign said in a statement to Fox News that the race “is and always has been competitive, just like the 5 others that Rep. Maloney has won.”

Lawler also accused Maloney of not being present in the district.

“He hasn’t been in the district, he’s been gallivanting around the globe raising money in Paris and Geneva, and voters see it,” Lawler said. “And they’re tired of it and they want change.”

The Maloney campaign spokesperson countered, saying that Maloney “is working tirelessly” to help the Hudson Valley.

“Through his travel, he raised millions for candidates who will help stop MAGA Mike Lawler’s plans to ban abortion,” the spokesperson said. “Rep. Maloney has an unrivaled record of delivering results locally, from lower prescription drug prices to banning oil barges anchorages on the Hudson. Just this month, Rep. Maloney has delivered funding for local firefighters, held dozens of campaign events, and hosted President Biden in the district to celebrate thousands of new manufacturing jobs for our communities.”

Maloney’s switch to the 17th district is just one part of a game of political musical chairs caused by the redistricting that saw more than one current House Democrat lose primary races.

Progressive Democrat Rep. Mondaire Jones currently represents the 17th district, but with Maloney moving in, he switched to run in the 10th district, which was left open when Rep. Jerrold Nadler, D-N.Y., decided to move from there to the 12th district.

The typically blue New York is also seeing a tight race for governor, with incumbent Gov. Kathy Hochul neck and neck with Republican challenger Rep. Lee Zeldin. Lawler said Monday that he believes Zeldin will pull off the upset.

Previous Amanda Kloots shares son Elvis has ‘started asking where his dad is’
Next Biden claims Republicans will crash the economy on purpose ahead of midterms: ‘Mega-MAGA trickle down’