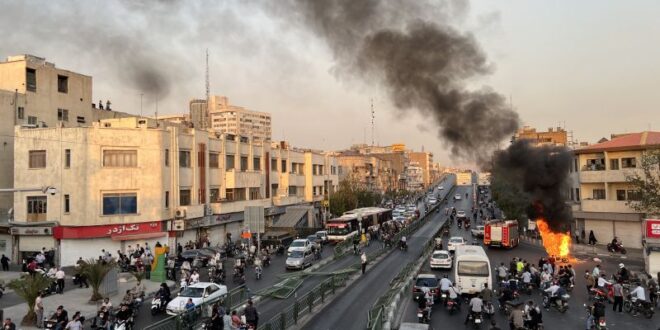 Iran says it will sue US, alleging ‘direct involvement’ in protests

Iran said Saturday it would take legal action against the United States, accusing it of “direct involvement” in the protests sweeping the country.

Tehran also warned the United Kingdom and Saudi Arabia would “not be ignored by the Islamic Republic’s judiciary system” for their role in hosting and supporting TV networks such as BBC Persian and Iran International – which it claimed had urged protesters “to destroy public and private properties.”

Anti-government protests have gripped Iran since the September 16 death of 22-year-old Mahsa Amini, who died after being pulled off the streets of Tehran by morality police and taken to a “re-education center” for lessons in modesty.

Strikes and protests have become a common sight in cities and towns across the country and in the capital chants of “death to the dictator” – in reference to Supreme Leader Ayatollah Khamenei – often ring out at night from the rooftops.

US President Joe Biden has thrown his support behind the demonstrators, promising costs “on perpetrators of violence against peaceful protesters” and saying the US stands with the “brave women of Iran who right now are demonstrating to secure their basic rights.”

The US has also announced sanctions on Iran’s morality police “for abuse and violence against Iranian women and the violation of the rights of peaceful Iranian protesters” and is working to making it easier for Iranians to access the internet.

This is not the first time Iran has accused the US of meddling in anti-government protests – it made similar claims in 2018.

The state news agency IRNA reported on Saturday that the Justice Department “has been tasked to file a lawsuit in order to investigate the damages and meddling inflicted by the US’s direct involvement in the unrest.” It also reported the claims against the BBC and Iran International, made by the deputy head of the Iranian Judiciary and secretary of the country’s High Council for Human Rights Kazem Gharibabadi.

The report did not make clear what court would hear such a case.

Meanwhile protests are continuing both within Iran and in solidarity movements across the world, with large demonstrations in both Berlin and Tokyo on Saturday.

Within Iran, business owners and factory workers from the Kurdistan region went on strike and students from universities across the country joined in on the demonstrations.

Video shared with CNN by pro-reform activist outlet IranWire, show Sanandaj, the capital of the Kurdish region, eerily quiet at the beginning of the work week as stores remain shuttered.

On Saturday, videos of protests against the Iranian regime from IranWire showed a crowd at Tehran’s Shahid Behasti University chanting “Freedom, freedom, death to the dictator, death to Khamenei.”

Students at Tabriz University in East Azerbaijan province also took to the streets chanting in unison that regime change was on the horizon, according to IranWire, and at Yazd University in Yazd province, students sang a century-old pre-revolutionary anthem.

An eyewitness told CNN that young girls from local schools who joined in the protests calling for “freedom” and “death to the dictator” were rounded up by police moments later and loaded into black vans.

Outside Iran, video published by Radio Free Liberty showed protesters on a boardwalk in Sydney, Australia, chanting “freedom” on Saturday.