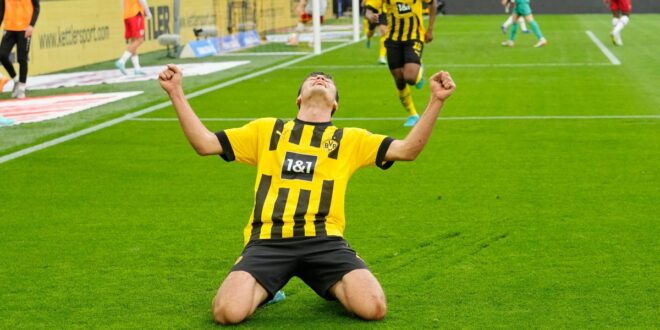 For the first time in 421 days, Borussia Dortmund and United States men’s national team star Gio Reyna found the back of the net.

In a Saturday Bundesliga match against VfB Stuttgart, Reyna put his Dortmund side up 3–0 with a right-footed strike in the 44th minute. Following a pass out to the left wing from Youssoufa Moukoko, the 19-year-old took one touch before sending a curling low finish to the far post and past Stuttgart keeper Florian Müller.

Reyna clearly felt the emotional impact of snapping his lengthy goal drought. After the goal—his first since Aug. 27, 2021—the USMNT standout slid to the ground in celebration and pointed to the sky, while his teammates quickly swarmed him on all sides.

Saturday marked Reyna’s first start of the 2022–23 campaign after having come off the bench in five of Dortmund’s early-season Bundesliga matches. The teenager has slowly been working his way back into form after having missed the end of last season with a run of injury issues.

The goal against Stuttgart was certainly a welcome sight to see for Dortmund supporters, but also for USMNT fans who hope that Reyna can have a significant impact at the upcoming World Cup in Qatar. Should he show flashes of the brilliance seen Saturday, Reyna could very well provide the American side with a massive boost at just the right time.

Daily Cover: James Wiseman Is in a Golden State of Mind

Previous Cristiano Ronaldo: Will forward and Manchester United agree an exit strategy with ‘the end in sight’?
Next Jackie Kennedy was prepared to die during Cuban Missile Crisis, ex-Secret Service bodyguard claims