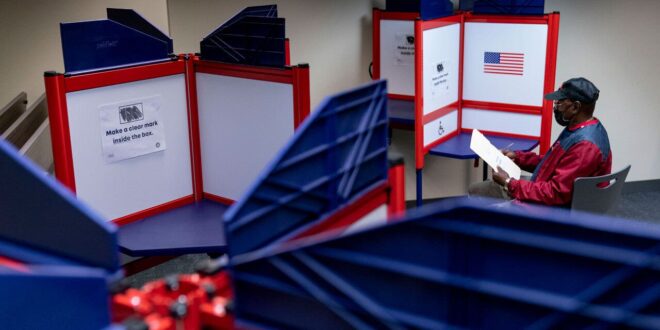 Voters in northern and southwest Virginia have recently received notices directing them to incorrect polling locations, the state Department of Elections confirmed this week.

In a statement provided to The Associated Press on Friday, Virginia Commissioner of Elections Susan Beals said the department had determined that a mailing of 31,000 voter notices with incorrect polling place locations had gone out to voters in seven towns across Prince William and Fairfax counties.

The disclosure came after Beals said in a statement earlier in the week that voters with a P.O. box in nine southwest Virginia localities may have received notices with incorrect voting location information.

A department spokesperson, Andrea Gaines, did not respond to questions from The Associated Press earlier in the week about whether the issue was limited to voters in southwest Virginia. She said Friday that the department was “working on determining additional information about the matter.”

Earls said the state had hired a third-party vendor to handle the post-redistricting notices, which he appreciated. But he said the first issue was that the initial wave of notices went out to voter’s physical address, even if they had a P.O. box.

“So then this batch that was sent out to P.O. Boxes had the wrong information,” he told the newspaper. “It was way off. The only thing that was correct was the name and address on the front (of the envelope), but on the inside it had a different name and a voting location that may or may not have been within this county.”

Voters can check their registration status and Election Day polling place online or by calling the department at 804-864-8901 and dialing 0 for the operator. The Department of Elections said it will mail corrected notices to all affected voters.

The voter-notices issue came after the department earlier this month acknowledged discovering a backlog of voter registration applications. In that case, an IT network issue within the Department of Elections led to a delay in processing about 107,000 voting-related transactions submitted through the Department of Motor Vehicles, the agency has said.

The agency said no voter registration data was lost, but some already busy local registrars said the backlog meant they would be putting in longer hours to catch up.

The issues are arising at a time when GOP Gov. Glenn Youngkin — who campaigned on a pledge to make the state’s government run more efficiently — is crisscrossing the country to stump with Republican midterm candidates. Virginia Democrats have accused him of neglecting his duties.

“While Youngkin travels around the country campaigning for extremist far-right candidates, his (Department) of Elections continues to impede Virginia voters’ rights to the ballot,” state Sen. Ghazala Hashmi tweeted Thursday. “When is the governor going to focus on the issues and concerns facing his own administration?”

Youngkin’s spokesperson did not immediately respond to an emailed request for comment.

Early voting has been underway in the state since Sept. 23 at local registrars’ offices or satellite voting locations and runs through Nov. 5. Election Day is Nov. 8.