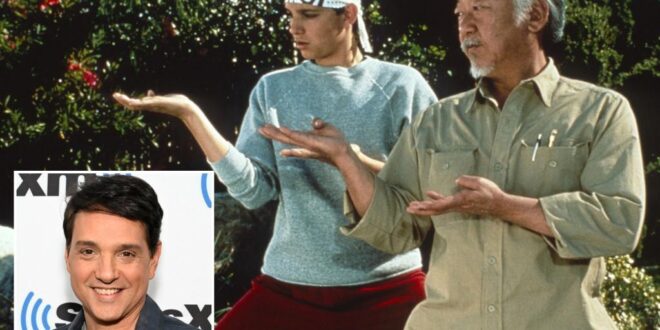 Ralph Macchio is taking a crane kick to criticisms that “The Karate Kid” was “too white.”

“People have said it’s a very white cast..that it didn’t dive into the Asian story,” Macchio said in this week’s issue of Stellar Magazine.

The 60-year-old actor said the 1984 classic, where he starred alongside Noriyuki “Pat” Morita as the new kid in town bullied by his school’s crew of karate menaces, was actually progressive in its approach to the Asian American experience.

“But I always say this: the film was ahead of its time because it was a popcorn movie that talked about Japanese internment camps during World War 2.

“Pat always said the scene [in which it’s revealed Mr. Miyagi lost his wife and child in the camps] earned him his Oscar nomination,” Macchio said adding the scene where Morita’s character was inebriated, was poignant to the Japanese American actor.

“Pat himself spent two years in the camps. So it had double meaning and some depth.”

The Long Island native, who went on to act in two “Karate Kid” sequels and is currently starring in the spinoff, “Cobra Kai” is promoting his memoir, “Waxing On: The Karate Kid and Me” where he revealed that the drunken scene almost didn’t make the cut.

“They felt it took too long,” Macchio writes of movie execs. “The studio’s main concern was that with the movie running over two hours, they would lose a daily screening time, and essentially, money in the process.”

But, as director John Avildsen soon told Macchio: “They all shut up once we screened it for them with an audience.”

In the tome, he also wrote that he was up against Charlie Sheen for the role of Daniel LaRusso and that he hated the movie title.

“And the title of the script they were sending me was: ‘The Karate Kid,’” writes Macchio. “What? Seriously? Was this a cartoon? An after-school special? All I kept thinking was, ‘What a silly, lame-ass title. It must be a placeholder.’”

And most shockingly of all, he said no one told him “The Karate Kid” reboots were being made.

Previous Ronaldo Garnering No Interest as Free Transfer From Man United, per Report
Next Princess Charlotte ‘needs protection in her bedroom’