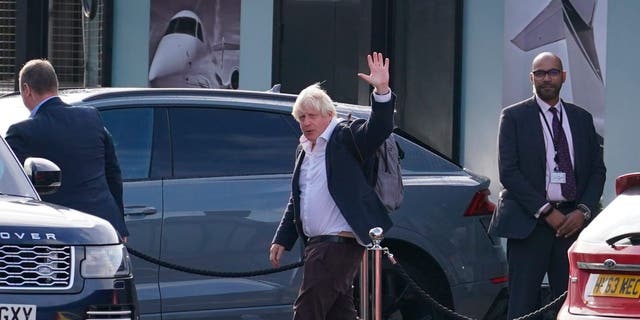 Boris Johnson, former U.K. prime minister, has left his Caribbean vacation and returned to London to take a second stab at the top job just months after being ousted, according to reports Saturday.

Johnson was in the Caribbean when Prime Minister Liz Truss announced her resignation Thursday and sent the Conservative Party into chaos as they look to once again fill the top job just six weeks after Truss took up the post.

The former prime minister has not publicly commented on whether he is seeking a re-election bid, but according to a Reuters report he told trade minister James Duddridge that he was “up for it.”

Former Prime Minister Boris Johnson arrives at Gatwick Airport in London, after travelling on a flight from the Caribbean, following the resignation of Liz Truss as Prime Minister, Saturday Oct. 22, 2022.
(Gareth Fuller/PA via AP)

It is also unclear whether he cut his vacation short in light of Truss’ resignation, but Tory officials vying for the top job will need to garner the support from 100 lawmakers by Monday, which could mean a long weekend of lobbying for the former prime minister.

Johnson was ousted from the top job in July after he lost the support of his own party following a series of scandals that ultimately led to the mass resignation of dozens of government officials, including within his own cabinet.

Whether Johnson will be able to get the backing he needs from the Conservative Party remains unknown along with what the repercussions would be for the Party in the next general election if he secured a second term. 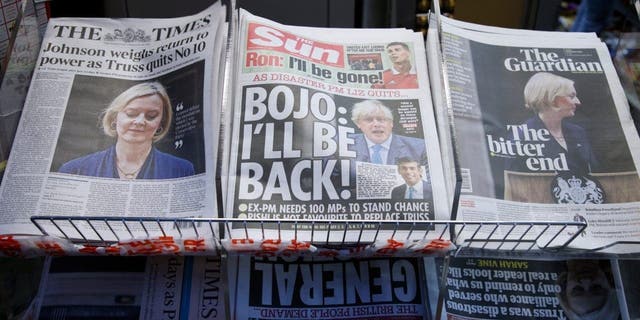 A selection of the front pages of British national newspapers showing the reaction the the resignation of Prime Minister Liz Truss, in London, Friday, Oct. 21, 2022.
(AP Photo/David Cliff)

Johnson has become a controversial figure in the U.K. and was reportedly booed by fellow passengers as he sat with his family on the return flight to London Saturday, according to a Sky News reporter.

Johnson is expected to face off with his former finance minister, Rishi Sunak, who is also a top contender in the latest race to be prime minister.

A vote within the 170,000-member Conservative Party could be held as early as Monday so long as only two candidates are able to meet the 100-vote threshold. 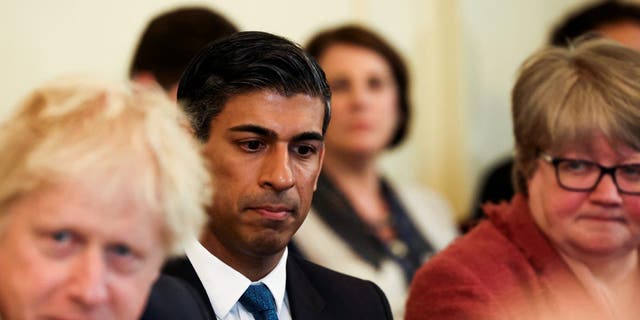 If only one candidate garners the minimum votes needed, then that contender will automatically get the job.

Ballots are expected to close Friday, Oct. 28, and results will be announced the same day.