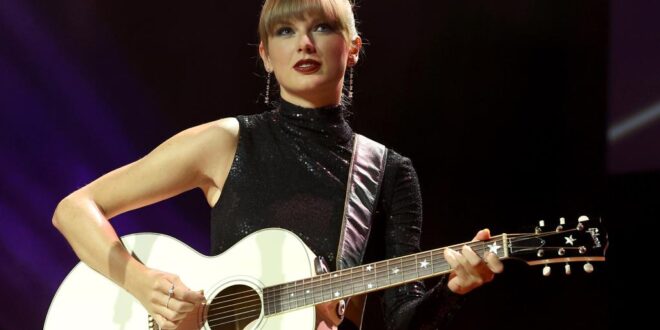 If you thought Taylor Swift was going to shake off the moody melancholy of “Folklore” and “Evermore” — the double dose of alluring alt-folkiness that she gave us in 2020 — think again.

“Midnights” — the pop superstar’s much-anticipated new album that, after arriving at the stroke of midnight on Friday, will be keeping Swifties up all night — is designed for the quiet of the dark. Indeed, Swift’s 10th album — which comes almost exactly 10 years after she began to make her play for pop dominance with 2012’s “Red” — is a far grayer shade of the 32-year-old singer-songwriter.

And with far more subtleties than you might expect from the artist who a decade ago was singing “We Are Never Ever Getting Back Together,” it’s an album that sneaks up on you rather than hitting you with the peppy punch that made her a pop powerhouse.

It’s a grower, not a shower.

And surely only an artist of Swift’s stature could expect her audience to patiently wait for the payoffs here. Now it makes sense why she didn’t release any singles from “Midnights” before the LP. There is nothing approaching the kind of slam-dunk singles that launched many of her albums. And some of it is downright downbeat.

“Meet me at midnight,” she begins on the opener “Lavender Haze,” which pulses with electro.

But things get darker on tracks such on “Maroon,” which finds Swift reflecting about the “the lips I used to call home.”

Lana Del Rey appears on “Snow on the Beach,” with its low-key beauty, but you can hear her influence throughout the LP. Meanwhile, there’s a Bon Iver-esque eeriness to “Midnight Rain.”

“Midnights” definitely gets a little too sleepy at times. But things perk up some on “Karma,” one of the few instantly catchy cuts.

’Cause karma is my boyfriend/Karma is a god,” Swift sings about the sweetest kind of revenge.

And certainly “Vigilante S—t” will have you wondering which one of her exes Swift is talking about when she sings “Don’t get sad, get even.”