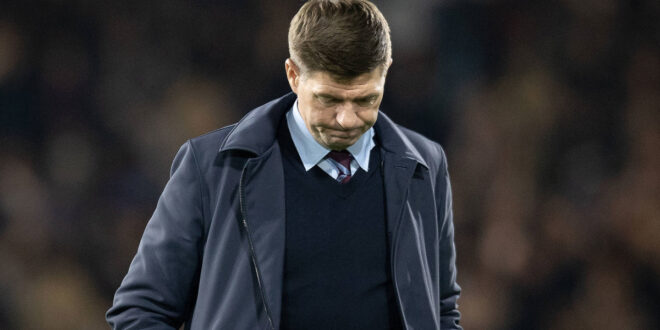 Aston Villa’s 3–0 loss to Fulham on Thursday was the final straw for Steven Gerrard.

Villa sacked its manager after a run of poor results left the club hovering just above the Premier League’s relegation zone following its latest defeat. The side sits in 17th place after 11 matches, out of the bottom three only on tiebreaker. Villa is winless in its last four matches and is 2-6-3 overall, leading to the club to sack the former Liverpool great, who rose to prominence as a manager for the work he previously did at Scottish power Rangers.

Villa said little in light of the decision, only offering Gerrard a token statement that read: “We would like to thank Steven for his hard work and commitment and wish him well for the future.”

The news of Gerrard’s sacking came shortly after his post-match press conference Thursday, in which he said, “I certainly share [fans’] frustrations and their pain, and I’m someone who’s honest and I know that they’re not enjoying it at the moment. I’m certainly not. So we’ll see what happens moving forward. You know and I know I’m in a very difficult position right now.”

That proved prophetic, as Gerrard now looks for work elsewhere to kick-start his managerial career. As for his successor, Villa did not name any permanent or interim hire in its club announcement. Former Tottenham manager Mauricio Pochettino has been linked to a return to the Premier League with the Villans, though. He has been out of work since being let go by PSG this summer.

Whoever takes charge has a tall task of inspiring what’s been an insipid attack. Villa has scored just seven goals in its 11 league matches, with no player on the club having more than one. For perspective, four players in the league, Erling Haaland (15 goals), Harry Kane (nine), Ivan Toney and Aleksandar Mitrović (eight apiece) have each outscored Villa to this point.