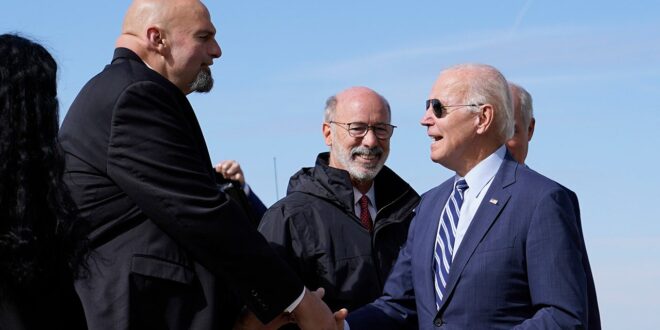 Pennsylvania Senate race: Biden tells voters to back Fetterman not GOP’s Dr. Oz because the ‘world is looking’

President Biden said during a visit to Pennsylvania on Thursday that voters should back Democratic Senate candidate John Fetterman over his Republican opposition, Dr. Mehmet Oz, because the “rest of the world is looking.”

Attempting to instill urgency in voters to turn out for what is expected to be a tight race — and one that could potentially decide the majority of the U.S. Senate — Biden said the implications of the race could vastly change U.S. policy.

Pointing to recent comments from House Minority Leader Kevin McCarthy, Biden argued a Republican majority would prevent him from sending billions of dollars to Ukraine amid its fight with Russia.

“They said that if they win they’re not likely to fund, to continue to fund Ukraine,” Biden said at a fundraiser in Philadelphia. “These guys don’t get it. It’s a lot bigger than Ukraine. It’s Eastern Europe. It’s NATO. It’s really serious, serious, consequential outcomes.”

He added: “The rest of the world is looking at this election as well. Both the good guys and the bad guys out there – to see what’s going to happen. We’ve got to win. John’s got to win.”

The president’s visit comes amid a heated Pennsylvania race which has given voters an option between the state’s current lieutenant governor and a Trump-endorsed Republican and political outsider.

Earlier this year, former President Donald Trump endorsed Oz’s candidacy during the state’s Republican primary. The endorsement has also helped narrow Oz’s once 10-point deficit to just under three points, within the margin of error for most polls.

Biden also swiped Oz, calling him “a perfect example” of a lawmaker who is loyal to Trump, which the president calls a “MAGA Republican.”

BIDEN PREDICTS GISELE FETTERMAN WILL BE ‘GREAT, GREAT LADY IN THE SENATE’

The tight race has seen the two candidates trade barbs such as Oz targeting Fetterman’s health after he suffered a stroke during the Democratic primary. In response, Fetterman’s campaign has continuously claimed Oz is from New Jersey, not the state for which he is running.

“Sometimes I’ll miss a word or I’ll mush two words together sometimes,” Fetterman said. “Dr. Oz never lets me forget that I had a stroke. In January, I’ll be feeling much better. But Dr. Oz will still be a fraud.”

Fetterman and his wife, Gisele, joined Biden during a tour of the Fern Hollow Bridge in Pittsburgh and later accompanied him to a Primanti Bros. sandwich shop in nearby Moon Township, where the president told reporters Democrats would retain control of the Senate despite many experts predicting the opposite.

“It ain’t over until it’s over,” Biden said.

The Fettermans and Biden then traveled on Air Force One to Philadelphia, where the president headlined another fundraiser.