Fifa Women’s World Cup 2023: Everything you need to know about Saturday’s draw

European champions England will discover their Fifa Women’s World Cup 2023 opponents in Saturday’s draw – and you can watch it live from Auckland, New Zealand, on the BBC iPlayer, the BBC Sport website and the Red Button from 07:30 BST.

Sarina Wiegman’s Euro 2022 winners are among 29 of the 32 World Cup teams already known, along with the Republic of Ireland – who will make their tournament debut – but Scotland and Wales narrowly missed out in the play-offs.

The 2023 World Cup is the first to include 32 teams, up from 24 at the last tournament in 2019 in France, with an inter-continental play-off tournament in February to decide the remaining three entrants.

Next year’s tournament will be played between 20 July and 20 August in Australia and New Zealand.

The draw to determine the groups will take place at 07:30 BST on Saturday from Auckland and it will also decide whether a team will be based in Australia or New Zealand. You will be able to follow text updates on the BBC Sport website.

Here is everything you need to know.

How does it work?

The 29 qualified teams and three play-off tournament placeholders have been allocated to four pots of eight teams each.

The allocation of teams into pots is based on the latest Fifa women’s world rankings.

The top six ranked teams, including England, have been allocated to Pot 1 along with the co-hosts Australia and New Zealand.

As well as the four team pots, there will be eight group pots which represent the groups, labelled A to H, where there will be four balls with the group position numbers 1, 2, 3 and 4 for each respective group.

The co-hosts have already been assigned to their groups, with New Zealand in position A1 and Australia in position B1. The remaining six teams in Pot 1 will automatically be drawn into position 1 of each remaining group.

The draw will start with the teams in the top pot and work downwards, finishing with the bottom pot.

After a team is drawn out, a second ball will be drawn to decide which group they are in.

Teams from the same continent will be kept apart – except for European countries, where a maximum of two can be in any one group.

However, since the winners of the inter-continental play-offs are not yet known, this principle may be broken and there may be instances where two teams from the same continent are included in the same group.

Who else could qualify?

A 10-team tournament will take place in New Zealand in February 2023, to decide the last three finalists.

The teams will be split into three groups, two of three teams and one of four, with each group playing its own knockout competition.

In the two three-team groups, the seeded team will go straight to the final and meet the winners of the semi-final between the other two sides in their group.

Who could England face?

England could end up in a group with the Republic of Ireland since they are in the top and third pots respectively and two European nations can be in one group.

The Lionesses could end up in a group with previous World Cup winners Norway or Japan, who are both in Pot 2.

We could see them up against reigning Olympic champions Canada, South Korea – ranked 10 in the world – and this year’s Africa Cup of Nations winners South Africa, while a a theoretically kinder draw could pit them against Denmark, Jamaica and Zambia.

What about the Republic of Ireland?

Vera Pauw’s side head to the World Cup – their first major tournament – looking to spring a surprise.

The ideal scenario would be New Zealand from Pot 1 as the lowest-ranked team from that leading group, and the Republic would fancy their chances against either Norway, Italy, China or South Korea from Pot 2. However, any of the four big hitters in the second group – Canada, Spain, Brazil, Japan – would be a more daunting task.

A side filled with players from the Women’s Super League and Championship, the Irish would back themselves against any of the Pot 4 teams and, if the draw is kind, progression could be on the cards at the first time of asking.

Who won’t be there?

Home nations Scotland and Wales narrowly missed out on qualifying for the 2023 World Cup.

Scotland, who made their debut at a Women’s World Cup three years ago, suffered a 1-0 defeat to the Republic of Ireland in the play-off final.

Wales’ hopes of reaching a first major tournament came to an agonising end as Switzerland fought back to win their play-off final in the dying seconds of extra time.

Meanwhile, Iceland, ranked 15th in the world, will not be heading down under after they were dumped out of the play-offs by three extra-time goals from Portugal.

Russia will be absent after being kicked out of qualification following their country’s invasion of Ukraine.

Where will the matches take place? 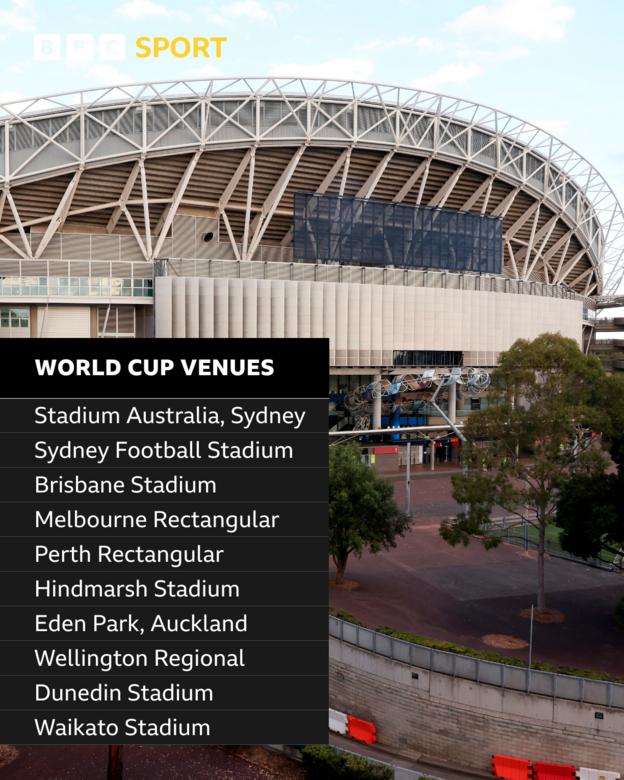 A total of 10 stadiums will be used for the tournament – six of them in Australia and four in New Zealand.

Teams drawn in Groups A, C, E and G will play their preliminary games in New Zealand, while those in Groups B, D, F and H will have their matches in Australia.

The largest stadium used in the competition will be the 83,500-seater Stadium Australia in Sydney, which will host the final on 20 August.

It will also host one game in each of the knockout rounds. The winners of Group B – which contains Australia – will play their round of 16 fixture at the stadium.

Meanwhile the largest stadium in New Zealand is 50,000-seater Eden Park in Auckland, which will host the opening game between New Zealand and a side in Group A on July 20. Eden Park will also host a game each in the round of 16, quarter-finals and semi-finals.

A second stadium in Sydney, the Sydney Football Stadium, will host matches, as will arenas in Brisbane, Melbourne, Perth, Adelaide, Wellington, Dunedin and Hamilton.