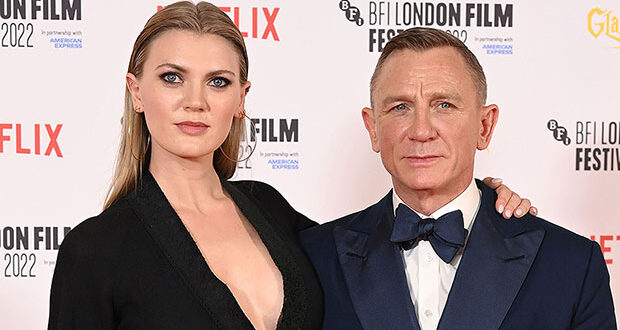 Daniel Craig took his daughter Ella Loudon, 30, to the premiere of Glass Onion: A Knives Out Mystery during the BFI Film Festival last weekend. The actor, 54, and his eldest child both looked incredible as they posted for photos on the red carpet on Sunday, Oct. 16 at the Closing Night Gala for the event. The James Bond icon sported a navy blue tuxedo with a white shirt and matching bowtie. Meanwhile, his look alike daughter looked incredible in a plunging black dress with long sleeves, accessorizing with hoop earrings.

Daniel shares Ella with his ex-wife Fiona Loudon, who hails from Scotland. The pair were briefly wed from 1992 – 1994 before divorcing and ultimately co-parenting their only child. Ella later moved to the US to attend boarding school in Massachusetts, and eventually New York University to pursue theatre and acting. After just a year, however, she dropped out — but still pursued acting.. Ella got her start in theatre then went on to appear in movies like 2017’s Maneater, Memory’s Paradigm, Cold Blood, Texas Road, and many more.

Daniel also shares a 4-year-old daughter with wife Rachel Weisz, 52. The pair married in 2011, making Daniel stepfather to her son Henry, 15, with ex Darren Aronofsky. Daniel and Rachel have not publicly announced the name of their young daughter, however, Rachel did mention her little girl in 2018 during an interview with Stephen Colbert. “She does look very like [her dad]…She really does,” she confessed, seemingly confirming she has “blue eyes” just like the Skyfall actor.

‘Glass Onion: A Knives Out Mystery’: Cast, Release Date, & Everything We Know About Netflix Film