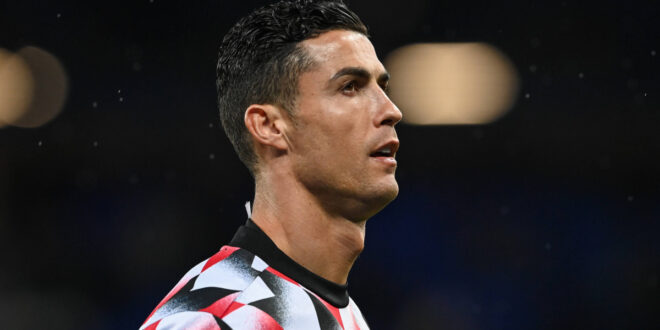 Good morning, I’m Dan Gartland. I was 100% correct about how terrible Matt Carpenter is.

♟️ The latest development in the chess cheating scandal

Cristiano Ronaldo has Worn Out His Return

After a dramatic turn of events this week, Cristiano Ronaldo’s second run at Manchester United might be coming to an end.

During Wednesday’s 2–0 win over Tottenham, Ronaldo refused to enter the game when other substitutions were made in the 87th minute. He left the bench, walked through the tunnel at Old Trafford and left the stadium before the final whistle blew, reportedly bypassing the locker room before his teammates arrived to celebrate the win. Gotta beat the traffic, I guess.

As a result, United has said that Ronaldo will not be with the team when it travels to London to face Chelsea tomorrow and he has been made to train alone.

Ronaldo’s behavior can’t be considered unexpected, though. Over the summer, he reportedly requested a transfer because he wanted to play in the Champions League this year. (United failed to qualify for the competition after finishing sixth in the Premier League last season.) Several Champions League clubs declined to pursue him, though, and Ronaldo returned to the United starting lineup for a friendly against Spanish side Rayo Vallecano in late July.

But Ronaldo, who was subbed off at halftime, left the stadium before the end of that game along with other United players. Manager Erik ten Hag called it “unacceptable.” And now Ronaldo has done something similar.

“I am the manager, I’m responsible for the top sport culture here and I have to set standards and values, and I have to control them. We are in a team,” ten Hag told reporters today, confirming reports that Ronaldo had refused to enter Wednesday’s game. “After Rayo Vallecano I said it’s unacceptable but he wasn’t the only one. That is for everyone, when it’s the second time it will have consequence. That is now what we did. We’ll miss him tomorrow, it’s a miss for the squad but I think it’s important for the attitude, mentality for the group.”

So what does Manchester United do now? The club is currently in the thick of the Premier League’s battle for Champions League qualification, one point behind fourth-place Chelsea. Ronaldo was the team’s top scorer last season (24 goals in all competitions) but has only started six times in all competitions so far this season, and it’s becoming clear that United doesn’t need Ronaldo to win. One of his two Premier League starts came in United’s humiliating 4–0 defeat against Brentford. But without Ronaldo in the lineup on Wednesday, United played what Jonathan Wilson called its best match under ten Hag, whose tenure began this season. “United now is demonstratively a better team without Ronaldo in it,” Wilson writes:

So what happens next? United has been open to selling Ronaldo since the summer. Ten Hag was initially keen to work with him but changed his mind after the humbling 4–0 defeat to Brentford. Ronaldo has started just two league games this season. But the problem is, there are no takers. The only offer United received for him in the summer came from Saudi Arabia, but Ronaldo was adamant he would only leave for a Champions League club. None who could afford him were interested.

In the short term, sitting at home isn’t really an option for Ronaldo, either, who is still a key part of the Portuguese national team. He’ll want to get some action before the World Cup—likely the final one of his career—begins next month. Whether United makes that happen is up in the air at this point.

Ronaldo’s contract expires in June but United has to figure out what to do with him until then. Even if the club can find a suitable transfer partner—which could prove difficult given the star’s demands, behavior and reported $600,000 weekly salary—the winter transfer window doesn’t open until Jan. 1. Will Ronaldo remain away from the team for two months until he’s able to be transferred or will he swallow his pride and realize that, as he approaches his 38th birthday in February, he might be best suited providing a spark off the bench?

In today’s Daily Cover, Howard Beck looks at the return of former top pick James Wiseman, who’s back with the Warriors after missing more than a year with a knee injury:

​​There’s a remarkable sense of Zen about Wiseman, as if he were a 10-year veteran and not a virtual rookie with barely a half season of games on his résumé. But then, few players at Wiseman’s age, with Wiseman’s talent, have traveled such a swift and jagged path to a championship parade.

New addition Christian McCaffrey is a perfect fit for what the 49ers already do well, Conor Orr argues. … Avi Creditor breaks down which USMNT players we should be concerned about heading into the World Cup. … College basketball season is closer than you think and Nick Selbe has a ranking of the men’s teams in the Pac-12. … We have an excerpt from Tyler Dunne’s new book about tight ends detailing the time Tony Gonzalez almost fought his offensive coordinator. … Here are the matchups, spreads and odds for SI Sportsbook’s Perfect 10 contest for Week 7.

Chess grandmaster Hans Niemann, who is at the center of an alleged cheating scandal, has filed a $100 million defamation lawsuit against fellow grandmaster Magnus Carlsen and others. … Jets receiver Elijah Moore wants to be traded. … If the Lakers are going to trade anybody (like, you know, Russell Westbrook) they’ll reportedly wait until after Thanksgiving to do it. … Tom Brady apologized for comparing playing an NFL season to military deployment. … Qatar will require World Cup visitors to install two data-tracking apps on their phones.

5. This video of Victor Wembanyama stepping over rows of chairs like it’s nothing.

4. The intricate defense Lakers coach Darvin Ham drew up during a timeout.

3. The hilarious end to the terrible Virginia-Georgia Tech game.

2. This amazing double play by the Yankees that required perfect execution by three players.

On this day in 1989, Bertram Lee and Peter Bynoe reached an agreement to become the first Black owners of a U.S. sports team. Which team did they buy?

Yesterday’s SIQ: On Oct. 20, 1993, the Blue Jays won the highest-scoring World Series game in history over the Phillies, 15–14. How many home runs did Toronto hit?

Answer: 0. How do you put up 15 runs without any dingers? By putting tons of runners on base and capitalizing on opportunities.

Blue Jays batters worked seven walks, reached once on a hit-by-pitch, benefitted from an error and picked up 17 hits. That’s 26 baserunners, and Toronto did a great job of driving them in. The Jays went 9-for-23 (.391) with runners in scoring position.

Toronto needed every last one of those runs because its pitchers were just as bad as Philadelphia’s that night. Jays starter Todd Stottlemyre lasted just two innings and gave up six runs. In the first inning alone, he walked four batters (including three in a row) and immediately surrendered the three-run lead his offense had staked him in the top half.

“It wasn’t baseball as much as it was pinball on artificial turf,” Mark Maske wrote in the Washington Post.

The win gave the Jays a 3–1 series lead, putting them on the cusp of winning their second straight World Series. The Phillies managed to win Game 5 but the Jays won the championship on Joe Carter’s walk-off homer in Game 6.

Including commemorative issues, Derek Jeter appeared on the cover of Sports Illustrated over a dozen times. This one, from his rookie season, is his first.

Tom Verducci’s cover story about the Yankees’ ALCS win over the Orioles is focused on another player, though: Bernie Williams, who had nine hits in 19 at-bats (.474) and two home runs during the series. Jeter was nearly as good, though, batting .417—plus, he was involved in the most famous play of the series. Here’s how Verducci described it:

Baltimore carried a lead into the eighth inning in each of the first three games and lost two of them. It was ahead 4-3 in the eighth of the opener when New York’s 22-year-old rookie shortstop, Derek Jeter, lofted a fly ball that sent rightfielder Tony Tarasco, not to mention Jeff Maier, to the wall. Jeff, 12, from Old Tappan, N.J., is symbolic of the kind of audience baseball is trying to recapture. The game, after all, began at the kid-friendly time of 4:08 p.m. While baseball was reaching out to youngsters like Jeff, he returned the favor. Just as Tarasco camped under the fly, Jeff, seated in the first row of Section 31 at Yankee Stadium, stuck his glove over the wall and into fair territory, hoping to grab a souvenir. The ball bounced off his mitt and into the stands. “It was a pretty high hit,” he said. “I’m not used to seeing a ball hit that high in Little League.”

Rightfield umpire Rich Garcia somehow did not see Jeff interfere with the ball, which, given the likelihood that Tarasco would have caught it, should have been ruled an out. Instead Garcia called it a home run. “His mistake was watching the outfielder instead of the ball,” Johnson said. None of the other five umpires admitted to having seen the kid touch the ball, either. “I saw it from the dugout,” fumed Johnson. “I always say one play doesn’t beat you. But that’s as close as you get.” Instead of being four outs from a win, the Orioles were tied. They were beaten three innings later when Williams blasted a hanging slider from Randy Myers into the leftfield stands.

It was just the first of many memorable postseason moments for Jeter.

Previous Dejan Kulusevski: Tottenham midfielder may be out until after World Cup – Conte
Next Wikipedia’s mobile app is the cure for my Google frustrations