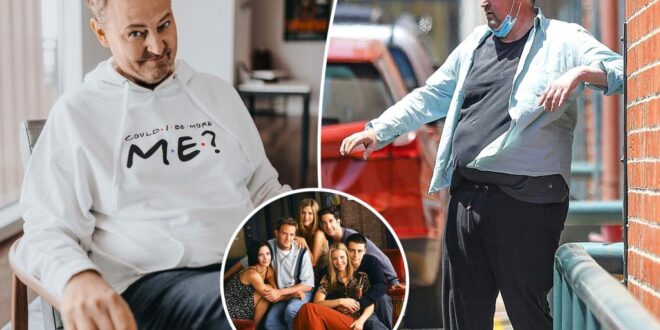 Matthew Perry revealed what made him finally stop taking drugs — a colostomy bag.

Perry — known for his role as Chandler Bing on “Friends” — opened his new memoir “Friends, Lovers and the Big Terrible Thing” with a harrowing scene where he was hospitalized due to a drug-related experience five months after his colon burst.

“I thought it would be grabbing. Especially to people who have this problem, and how dark it can get,” Perry, 53, told People.

“The doctors told my family that I had a two-percent chance to live. That’s the time I really came close to my life ending. I was put on an ECMO machine, which does all the breathing for your heart and your lungs. Every doctor says it’s a Hail Mary. No one survives that. So the big question is why? Why was I the one that survived? There has to be some kind of reason.”

Perry was in a coma for two weeks at the age of 49, and woke up to a surprise.

“I woke up and realized I had a colostomy bag,” he remembered. “They said, ‘It’s all too messy down there. We can’t do surgery. But in about a year you can reverse that.’ It was pretty hellish having one because they break all the time.”

The frightening experience and sight of a colostomy bag were what ultimately did it for Perry.

“My therapist said, ‘The next time you think about taking OxyContin, just think about having a colostomy bag for the rest of your life,’” he shared. “And a little window opened, and I crawled through it, and I no longer want OxyContin.”

The colostomy bag wasn’t the only thing that helped Perry get sober. The “Friends” star also recalled an experience he had in his kitchen that helped him stop drinking — after he thought he sensed God.

“It was this bright yellow object that became all-encompassing. I couldn’t see the kitchen anymore. It was just this light, and I felt loved and understood, and in the company of God or whatever,” he said.

“My dad was right next to me and we were holding hands and I was praying when it started, which is something I rarely did. It was like God showed me what’s possible. And then said, ‘Okay. Now you go learn this,’” Perry continued.

Perry’s memoir details his long battle with addiction and alcoholism, but Perry knows he’s now on the other side of it.

“I wanted to share when I was safe from going into the dark side of everything again. I had to wait until I was pretty safely sober, and away from the active disease of alcoholism and addiction to write it all down. And the main thing was, I was pretty certain that it would help people,” he said.

Though he won’t share exactly how long he’s been sober, he admits he still counts every day.

“It’s important, but if you lose your sobriety, it doesn’t mean you lose all that time and education. Your sober date changes, but that’s all that changes. You know everything you knew before, as long as you were able to fight your way back without dying, you learn a lot,” Perry explained.

Perry says he’s “grateful to be alive,” but what he’s most grateful for is his sobriety.

“Everything starts with sobriety. Because if you don’t have sobriety, you’re going to lose everything that you put in front of it, so my sobriety is right up there,” he said.

Perry’s memoir also details his past relationships, confessing to having a “tremendous amount of fear” when it comes to falling in love.

“Friends, Lovers and the Big Terrible Thing” will be released on November 1.