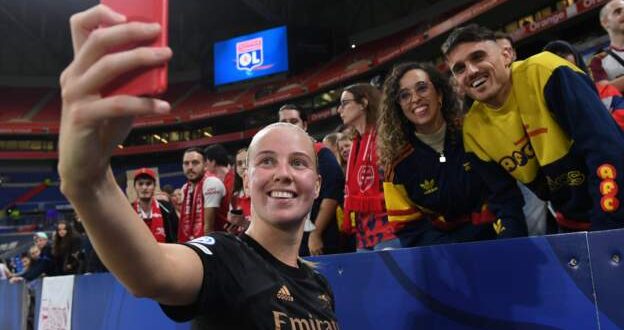 Lyon 1-5 Arsenal: A special night for Gunners as they humble Champions League holders

Manager Jonas Eidevall hailed Arsenal’s 5-1 Women’s Champions League win at holders Lyon as a “special night”, as pundits heaped praise on a result that “shifts the whole balance of the women’s game”.

The sensational Gunners humbled the European champions on home soil to make the rest of their continental rivals sit up and take notice.

Arsenal last won the Women’s Champions League in 2007 and no English side has done so since.

Other than Chelsea reaching the final in 2021 – when they were thumped by Barcelona – no other Women’s Super League side has even come close.

But if this impressive performance is anything to go by, Arsenal have every chance of ending the wait.

Former New Zealand captain Rebecca Smith, who won the Women’s Champions League with Wolfsburg in 2013 when they beat Lyon, told DAZN: “When we look at the women’s game, there’s been so many moments where history’s been made.

“This is yet another one where we’re seeing the whole balance of the women’s game shifting.

“Before, Lyon had all of the facilities, all of the money, all of the funding, but now that’s changing. We’ve seen the passion that Arsenal have played with tonight, it’s just proved that.”

The facts and stats to describe how big this win is for Arsenal are stark.

Lyon are eight-time winners of the Women’s Champions League. It is the first time they have conceded five goals since May 2005. They had previously not lost by more than a single goal in the Champions League since 2009 and this was only their second defeat in 83 home games.

‘Doing the right things gets you rewarded’

Two goals each from Caitlin Foord and Beth Mead and one from Frida Maanum sealed their success, and even manager Eidevall said the scale of the victory had taken him by surprise.

He said: “We were very effective, but as I told the players after, I think that they work extremely hard to carry out the gameplan both in offence and defence and when you do that sometimes these things happen.

“Of course it’s a special night. I think we won deservedly but of course 5-1 is an unexpected result against a very, very strong team.

This was Arsenal’s first win in six games against Lyon and they outplayed the French side in key areas.

Most importantly they dominated the midfield through Maanum, who was a surprise replacement for Vivianne Miedema in the starting line-up.

Striker Miedema had scored 120 goals in 149 games for Arsenal, but her 150th appearance was as a late cameo as Maanum was a menace in both breaking up play, creating chances and also took the crucial second goal with impressive opportunism.

‘Frida should be really proud’

“I think Frida is one of our players who has the strongest running ability,” added Eidevall. “I think she carries out a role tonight that requires an extreme amount of running because you basically have to defend two players all the time. I think she was brilliant, both on the ball and off the ball.

“I think it was an excellent performance from her and I think she should be really proud.”

Also superb was Mead as she gave Lyon full-back Selma Bacha a torrid time. Three of Arsenal’s five goals came by either breaking down the wings or forcing defensive errors in those areas.

Along with the decision to bench Miedema, it was a tactical vindication for Eidevall.

He said: “I think it’s not a surprise to people that have been following Lyon since pre-season and in the first games in the league this year that they have been a little bit exposed in the area behind the defending line.

“But I’m pleased that we’re doing it in different ways because it’s not that easy that you just hit the long ball over, I think we are preparing and have good patience and good positions to draw them out and then go at the right moment. I was really pleased with that.”

For Lyon, it was a chastening evening in which their injury-ravaged squad was brutally exposed and Melvine Malard’s goal was no consolation.

This was France international Eugenie Le Sommer’s first start in the Champions League since the 2020 final.

“We are obviously very disappointed,” she said. “We are disappointed with the result but especially with ourselves and what we did.

“We have a team that can do better. It’s hard to take five goals, even if we made mistakes that cost us a lot. We are Lyon and we must do better.

“We will raise our heads, we must forget this evening – nothing is decided yet. The format of this competition allows us to look forward.

“We still have five games left, we will have to do the work to get this qualification.”