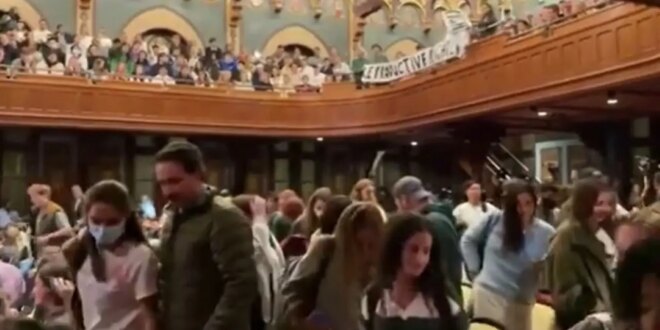 Georgetown students walk out during Pence speech, chant ‘hate has no home here!”

Video from a speech delivered by former Vice President Mike Pence at Georgetown University shows students walking out during the speech while other students unveiled a sign saying “reproductive rights are human rights.”

The video, posted by the Young America’s Foundation from a speech it hosted at the Washington, D.C., university, shows dozens of students walking out of the room while Pence spoke and as other students in the balcony of the venue unfurled a flag with pro-choice messaging.

Several of the students were wearing masks, and one could be seen waving a gay pride flag on the way out the door.

“It seems to me that having served many years in Washington, leaders in this nation’s capital have never been more out of touch,” Pence said as the students were exiting the building. “More intent on imposing their agenda or walking out on people that might have a different point of view.”

PENCE ON BACKING TRUMP IN 2024: ‘THERE MIGHT BE SOMEBODY ELSE I PREFER MORE’

The audience remaining in the auditorium cheered and applauded after Pence delivered that line.

“Hate has no home here,” protesters gathered outside the event could be seen chanting in a video posted by Young America’s Foundation. 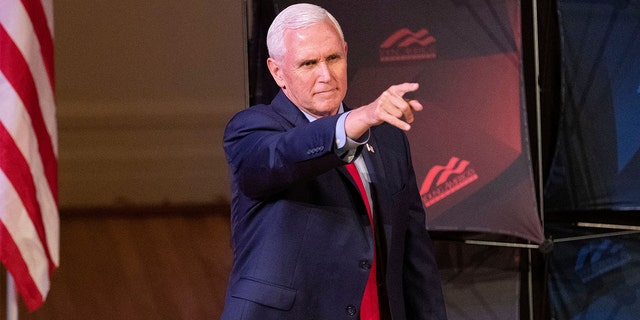 Former Vice President Mike Pence points as he arrives to speak at a campus lecture hosted by Young Americans for Freedom at the University of Virginia in Charlottesville, Va., April 12, 2022.
(Ryan M. Kelly/AFP via Getty Images)

In a statement to Fox News Digital, Young America’s Foundation said it was quickly able to fill the seats with Pence supporters waiting outside. 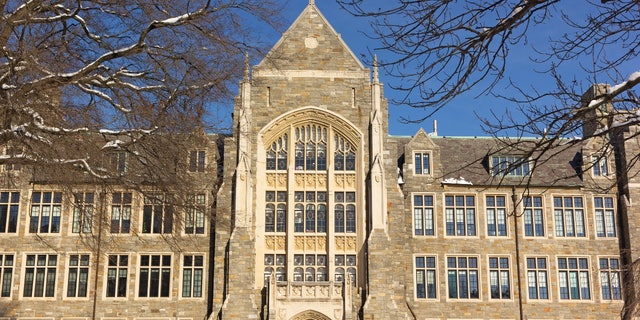 A representative for Pence did not immediately respond to a request for comment from Fox News Digital.

“Thank you @yaf and @GUPolitics!” Pence tweeted Wednesday night. “It was great to be at Georgetown tonight with so many great young Americans!”

Pence, who many believe is considering a presidential run in 2024, emphasized a message of tolerance during the speech and called for the restoration of civil discourse.

“I really do believe you can say to somebody they’ve got bad ideas without saying they’re a bad person,” Pence told the crowd. “I hold the view and have for many years that democracy depends on heavy doses of civility.”

Pence hedged when asked during a question-and-answer session following the speech whether he would support a Trump presidency in 2024.

“Well, there might be somebody else I prefer more,” he said with a smirk.

“All my focus has been on the midterm elections, and it’ll stay that way for the next 20 days. But after that, we’ll be thinking about the future,” Pence continued. “Ours and the nation’s. And, I’ll keep you posted. OK?”