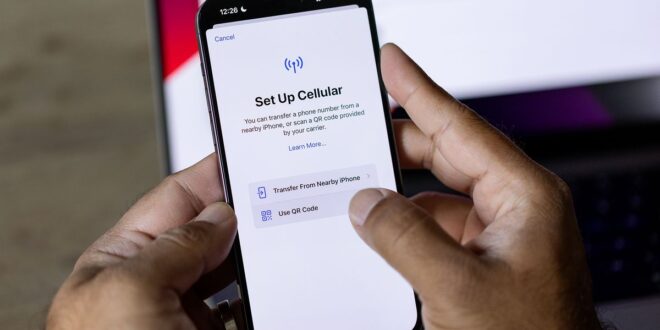 Before I set up the iPhone 14, I’d never used an eSIM. Whenever possible, I put my personal physical SIM card into whatever phone I’m reviewing rather than using a SIM provided by the manufacturer. When I’m done, my SIM comes out and goes right into the next phone that I’m testing — or, as a rare treat, into my personal iPhone 11. It’s a system that usually works just fine, but after reviewing the iPhone 14, those days are over. I ditched my physical SIM for eSIM when I set up the iPhone 14, embracing the chaos of a digital-only lifestyle. And I wish I hadn’t.

Apple forced my hand here — the versions of the iPhone 14 sold in the US come without a SIM tray. If I wanted to get my personal number onto the new iPhone I was reviewing, I’d need to do it via eSIM. And eSIM is great, according to Apple. It “makes things simple.” That’s true — if you’re moving your SIM from an iPhone to another iPhone. In fact, I like the process better than fiddling around with a SIM tool and a tiny card tray.

During initial setup, the iPhone 14 walks you through the steps of converting a physical SIM to eSIM. I didn’t have to contact my carrier or go to a store. I just did it all on the phone. And if you’re already using eSIM in your old iPhone, it’s even easier. You just follow the instructions on the screen and it’s all done in a couple of minutes.

It gets messier if you’re switching from Android to an iPhone or vice versa. This is where your carrier needs to get involved. In my case, when it was time to switch from the iPhone to a Pixel 7 Pro, I consulted Verizon’s eSIM support page. It contains very specific instructions to call customer service and not use chat. I did as I was told, and a customer service representative started the process while I was on the phone with him.

In hindsight, this was an obvious mistake, but please remember I was just following instructions. The call cut out when the representative started the transfer process because that’s what happens to your old phone when you move your number to a new one. I waited a few minutes to see if I would start getting service on the Pixel, but nothing happened.

At this point, I was worse off than when I started: instead of one phone with cellular service and one without, I now had two phones without service. I have never felt more foolish. I happened to be at The Verge’s office during this ordeal, so I used a landline phone (remember those?) to call customer service back and get the situation sorted out.

Instead of one phone with cellular service and one without, I now had two phones without service

A few days later, when it was time to switch to the Pixel 7, I thought I’d learned my lesson. I downloaded Verizon’s app on both phones to try and complete the transfer that way. I was switching between Android phones, which I thought would be less complicated. It wasn’t. I walked through the steps in the Verizon app to start the transfer, but an error popped up saying that it couldn’t complete the online authorization process. The same error popped up no matter how I tried — on the phone or on my laptop, in multiple browsers. So despite my best efforts, I once again called customer service to switch devices.

At least this time around, the service rep I spoke to was on her toes and emailed me the QR code I needed to finish the setup on my own before the line disconnected. I followed the setup steps myself and had service up and running on the new phone in a few minutes.

I reached out to Verizon and company spokesperson George Koroneos tells me that a self-service feature is coming to the My Verizon app in early 2023 to help Android Verizon customers switch to eSIM. Until then, as best as I can tell, I’m going about this the correct way by calling customer service to have the eSIM provisioned remotely and then using the emailed QR code to complete setup. Losing the connection halfway through the customer service call is inevitable if you’re calling from the line you want to switch, which is usually my only option.

This is my own little personal hell

So yeah, I can’t say I love eSIM so far. Of course, I’m bearing in mind here that most people do not switch phones every week, let alone switch between iOS and Android devices that frequently. This is my own little personal hell. But I think, at this point, most people who can avoid jumping to eSIM should stick with physical SIM cards if they can. If there’s a silver lining to Apple hurtling so many of us into the era of eSIM, it’s that carriers will have to catch up and provide better support for people switching. In the meantime, I might make another call to Verizon and ask for my physical SIM card back.