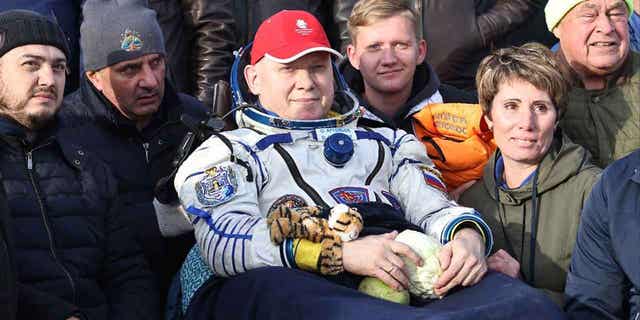 After three missions in space, Russian cosmonaut Oleg Artemyev ran into difficulty on Earth when he drove over a colleague on a dark road outside Moscow less than three weeks after returning from his latest orbiting mission.

It said in a statement Tuesday that Artemyev immediately provided first aid assistance to the victim, Anatoly Uronov, who was hospitalized with several fractures. Roscosmos emphasized that Artemyev was sober and immediately called police and an ambulance.

Russian cosmonaut Oleg Artemyev sits in a chair shortly after the landing of the Russian Soyuz MS-21 space capsule southeast of Zhezkazgan, Kazakhstan, on Sept. 29, 2022. Artemyev drove over a colleague on a dark road outside Moscow less than three weeks of returning from his latest orbiting mission.
(Pavel Kassin, Roscosmos State Space Corporation via AP)

On Sept. 29, the 51-year-old Artemyev returned from his third mission to the International Space Station, which brought his total time spent in orbit to 561 days.

Previous Florida Senate: Rubio and Demings argue over abortion limitations, exceptions in heated debate
Next Florida Senate: Democrat Val Demings doesn’t say whether she will accept the results of election