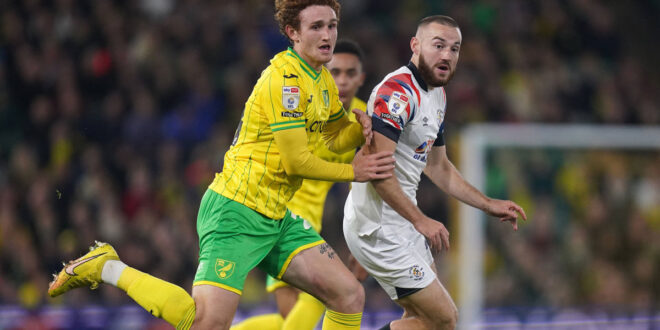 When Josh Sargent was pulled from Norwich City’s match vs. Luton Town on Tuesday, it may have been cause for concern for the U.S. men’s national team, but Canaries manager Dean Smith has moved to ease that worry.

Sargent, who has found his scoring form for the second-tier English club and is firmly in the mix to be part of the U.S. World Cup team, was taken off at halftime with an apparent leg injury, but he’s not expected to miss any time.

“Josh got a whack on the back of the leg, so he couldn’t really extend himself. I don’t think it’ll be too bad, I expect him to be back on Saturday,” Smith said after the 1–0 loss. “We couldn’t take the risk on him tonight.”

Sargent has eight league goals on the season, tied for most in the Championship. He had scored in consecutive matches prior to Tuesday’s defeat. U.S. goalkeeper Ethan Horvath, who is also hoping to go to Qatar, was the on the other side of Norwich’s loss, posting the clean sheet in goal for Luton Town.

Sargent’s injury prognosis was the second bit of positive news on that front for U.S. forwards on Tuesday. Jordan Pefok, who exited Union Berlin’s defeat of Borussia Dortmund over the weekend with a leg injury, is also expected back in action this coming weekend, dodging a bullet. With the World Cup a month away and the U.S. roster due to be unveiled Nov. 9 at an event in New York, any injury at this juncture could prove prohibitive for players with dreams of performing in Qatar. For Sargent and Pefok, it appears instead that they’ll be able to remain on track, attempting to prove their worth to Gregg Berhalter and his staff before the grand 26-man roster reveal.