Florida Senate: Marco Rubio and Val Demings take aim at one another on immigration, gun control

A debate between Florida’s two Senate candidates – incumbent GOP Sen. Marco Rubio and Democratic Rep. Val Demings – became heated as the pair took aim at one another on a number of issues, including rising prices, abortion, gun control and immigration.

Notably absent from the Tuesday evening debate held at Palm Beach State College’s Lake Worth campus was the issue of crime, which Republicans have prioritized in the election amid rising crime rates across several major American cities.

Asked about rising costs, from housing to gasoline, and how they will “help families now” after trillions of dollars were utilized by the government for pandemic relief in America, the two candidates took issue will policies their opponent had supported in the past.

Rubio insisted that the government’s spending led to a rise in inflation, saying Democrats “were warned by Larry Summers, by other Democrat economists, you do this, you’re gonna fire up inflation” and insisted that one resolve to the issue would be the production of American oil.

“We’ve got to produce American oil again,” Rubio said. “Why are we begging Saudi Arabia for oil? Why are we begging Venzuela and Iran for oil? We’re producing a million barrels a day less on oil than we used to do just a couple of years ago. Instead, we are depleting our reserves. Our oil reserves do not exist to win midterms. They exist to help this country in an emergency or in the midst of a storm. What we cannot do is some of these crazy policies that are coming from the left that Congresswoman Demings has supported.”

Responding to criticism from Rubio, Demings said, “Of course the senator who has never run anything at all but his mouth would know nothing about helping people and being there for people when they are in trouble. No one planned the pandemic, but our response to it is everything. Individuals were hurting, families were hurting, businesses were hurting. We passed the CARES Act.”

“Your number one job as a United States Senator is to protect the safety, health, and wellbeing of the American people,” she added. “You’ve been at it for 24 years…”

Rubio also accused the congresswoman, who currently represents Florida’s 10th Congressional District and previously served as chief of the Orlando Police Department from 2007 to 2011, of having “never passed a bill” during her tenure in Congress. 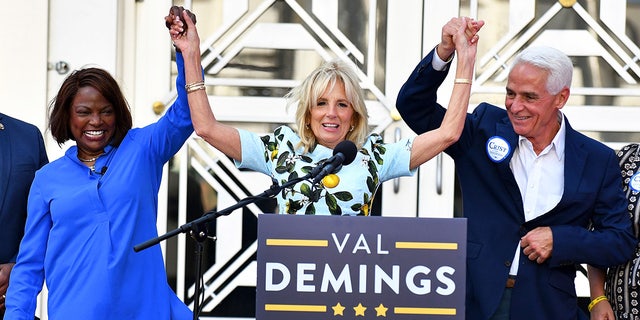 “I’m really disappointed in you, Marco Rubio, because I think there was a time when you did not lie in order to win. I don’t know what happened to you. You know that’s not true,” she said. Demings claimed she passed a measure during her first term in Congress to “help law enforcement officers with mental health programs.”

The two also took issue with one another on the issue of abortion, with Demings claiming that her opponent supports no exemptions for the procedure, including rape and incest, and Rubio claiming that Demings supports “no restrictions, no limitations” on abortion.

FLORIDA SENATE: DEMOCRAT VAL DEMINGS DOESN’T SAY WHETHER SHE WILL ACCEPT THE RESULTS OF ELECTION

“The extremist on abortion in this campaign is Congresswoman Demings,” Rubio said. “She supports no restrictions, no limitations of any kind. She’s against the fourth-month ban, she voted against the five-month ban. She supports taxpayer funded abortion, on demand, for any reason, at any time, up until the moment of birth.”

“Senator, how gullible do you really think Florida voters are,” Demings responded. “You have been clear that you support no exceptions, even including rape and incest. Now as a police detective who investigated cases of rape and incest, no, senator, I don’t think it’s okay for a ten-year-old girl to be raped and have to carry the seed of her rapist. No, I don’t think it’s okay for you to get to make decisions for women and girls as a senator. I think those decisions are made between the woman, her family, her doctor, and her faith.”

Demings said she “supports a woman’s right to choose up until the time of viability.” In response, Rubio insisted that’s a “vague” term that many Democrats use in order to provide a clear answer on limitations.

“Every law I’ve ever passed has exceptions,” Rubio said. “We’re never gonna get a vote on a law that doesn’t have exceptions cause that’s where the majority of the American people are and I respect and understand that.” 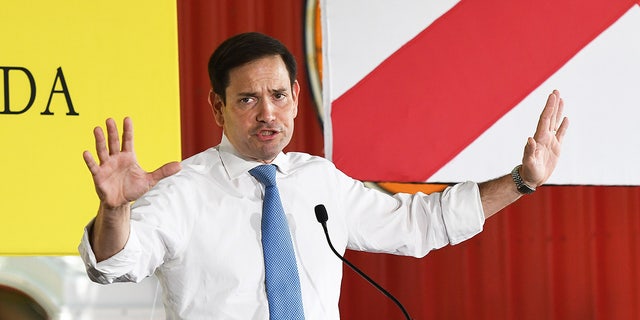 Sen. Marco Rubio speaks to supporters at a campaign stop on the Keep Florida Free Tour at the Horsepower Ranch in Geneva.
(Paul Hennessy/SOPA Images/LightRocket via Getty Images)

On the issue of gun violence in America, Demings insisted that Rubio has lacked on the issue and done little to advance bills that would prevent people from obtaining weapons to cause harm.

“You’ve done nothing. Nothing to address gun violence and help to get dangerous weapons out of the hands of dangerous people,” Demings said. “Our primary responsibility is the safety of Floridians and senator, 24 years in elected office and you have not yet risen to that occasion and then when asked about it you say something that makes no sense.”

In response, Rubio said, “What makes no sense is that we’re gonna actually pass laws that only law-abiding people will follow and criminals will continue to violate.”

“The truth of the matter is that at the end of the day, Americans have a Second Amendment right to protect themselves,” he added. “These killers that are out there, if there intent is killing as they are, they have found multiple ways to get ahold of weapons and cause mass destruction. … I have a bipartisan red flag law, sponsored with Sen. Jack Reed, but the problem is that the leftists in the Senate, and in the House, like Congresswoman Demings are against it because they want the California red flag law that allows your coworker who has a grudge against you to go to a judge and take away your guns. That, I’ll never support.”

The two candidates were also asked about the immigration crisis and whether they support a recent policy change from the Biden administration to send Venezuelans who arrive at America’s border back to Venezuela and prevent them from applying for asylum in America again.

“You mean Joe Biden just instituted Trump’s return to Mexico policy,” Rubio stated. “There’s not more to it, that’s exactly what he did. Congresswoman Demings said what’s happening at the border is nothing unusual. We have 5,000 people a day crossing the border. You know how many people have entered our country illegally since Joe Biden took over as president? 5 million.”

“There’s no country in the world that can tolerate, or permit, or afford, 5,000 people a day arriving at your border saying the magic words and getting asylum. And she says that’s not a problem. She says there’s nothing unusual about it. This cannot continue. It has to be fixed.”

Demings responded by referencing her career as a police officer and police chief, saying “We’re a nation of laws. I’ve enforced them for 27 years.” 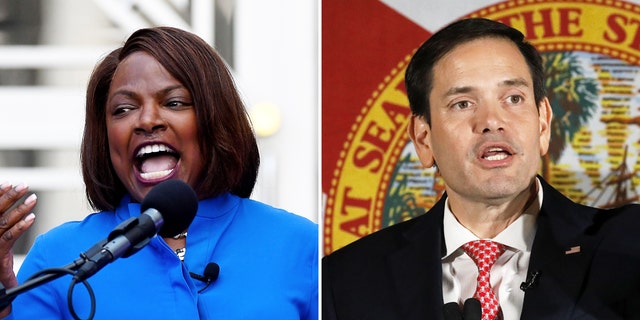 “Despite what the senator wants you to believe, he’s living in fantasy land,” she said. “We need to make sure the men and women at the border have the resources they need. I’m a fan of boots on the ground, but we need to hire more processors. … We’re a nation of laws. We have to enforce the law, but we also have to obey the law that says people who are in trouble can seek asylum in this country.”

“The senator likes to talk about open borders. It’s almost an insult to the men and women who are there securing the border,” she added.

Rubio, in response, claimed that the “only one who’s insulted the people working the border are Joe Biden and Democrats who accuse them of whipping Haitian migrants and that turned out to be true.”

According to poll of likely voters conducted by Spectrum News/Siena College in September, Rubio leads Demings 48% to 41%.

Rubio and Demings will go head-to-head in the Sunshine State’s November 8 midterm election.

Previous Florida Senate: Democrat Val Demings doesn’t say whether she will accept the results of election
Next Atlanta voters reveal which issue could decide their vote: abortion access or the economy?