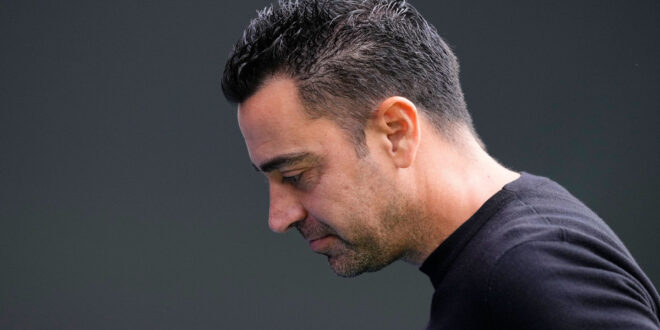 What will concern Barcelona most about Sunday’s 3–1 defeat to Real Madrid is less the result than its nature. Eight games into the league season, this refurbished Barcelona had seemed to be ticking along nicely enough, with seven wins and a draw, but poor recent Champions League results followed by a Clásico defeat has led to a reassessment. And the truth is that Barcelona’s perilous financial position has raised the stakes: In an environment this fraught, any doubts could grow rapidly.

To an extent, this is the bifurcated nature of modern football. For the superclubs, a dreadful season can be finishing third. They exist on a different plane than the rest. They have the resources and the players to overwhelm clubs with less. For them to beat the mid-table and lower-ranking sides in their leagues is a matter of little consequence. What is important is what happens when they come up against the elite.

And the sad truth for Xavi and his new Barcelona is that in every game this season when it has played a top side, it has come up short—and always in the same way. Wins over Elche, Cadiz and Mallorca say little about Barcelona’s qualities. The warning signs came in the away game at Bayern Munich. Barcelona could legitimately say it had had chances through Robert Lewandowski and that it had been blown away in a brief burst just after halftime, but it turned out that game had not been an aberration. Rather, that was the beginning of a pattern.

It happened again against Inter at the San Siro, the site of a 1–0 Champions League defeat. Again, Barcelona had an excuse with a couple of tight VAR calls going in Inter’s favor. But then it happened again at home against Inter, with only Lewandowski’s brilliance salvaging a 3–3 draw. And then it happened against Real Madrid with Sunday’s defeat. In all four of those games, Barcelona had a lot of the ball, passed it around without looking overly menacing and was caught out by a more incisive team attacking intelligently on the break.

In the short term, the probability is of a group-stage exit in the Champions League for the second successive season. But the bigger question is the two issues raised in the medium-to-long term. Firstly, what level of failure can Barcelona survive? After it sold off a number of club assets in the summer to fund an astonishing transfer spree, the suggestion was that it had budgeted to reach the quarterfinal of the Champions League. Even before an admittedly tough draw, that was an ambitious target. Will more of its future television rights, further chunks of the club’s marketing agency, have to be sold off?

And the issue is not just the direct financial impact. How many seasons of early exits can Barcelona survive before players begin to doubt its potential to remain at the top table? When do players start to leave in search of silverware, or potential transfer targets turn Barcelona down because they believe other clubs offer a greater chance of medals?

And secondly, what does this say of Xavi’s qualities as a coach? He was always one of the more sanctimonious Barcelona players, regularly describing football as though it were a battle between good and evil, with Barça on the right side. But it’s one thing to do that when playing for a hugely successful team and facing down the threat of José Mourinho’s Real Madrid, which almost willfully took on the role of villains, and quite another when you’re a rookie manager leading a club whose behavior over the summer was, at best, questionable.

Xavi always seemed like such an intelligent player that the assumption was that he would take readily to management. It’s early yet, but there is a growing body of thought that he may be a cargo-cult coach, capable of parroting the dictums of Pep Guardiola but without his understanding—the result being something that has the appearance of great Barcelona football without the substance, lots of pretty passes, but with a soft underbelly and not much cutting edge.

The home game against Bayern next week offers a chance at Champions League redemption and consolation—or risks becoming the latest piece of evidence in the pattern that’s been building. That match is sandwiched between testing league games against Athletic Bilbao and Valencia. It seems as though the next couple of weeks will be a major factor in deciding how this season plays out—and that, in turn, could be decisive as it relates to the future of the club.

And if it does go wrong, if the club is not lured into a virtuous circle, what then? The problem is that the gamble of the summer leaves very little room for Barcelona to maneuver.

Previous Jurgen Klopp: Liverpool manager says his Man City comments were not xenophobic
Next Netflix has 55 more games in development