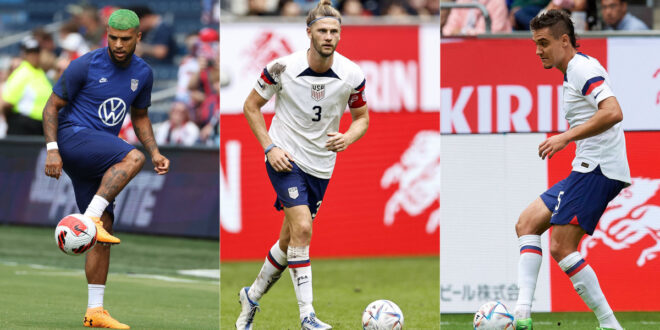 The U.S. men’s national team’s technical staff is always plugged into what its entire player pool is doing on a match-to-match basis. As the 2022 World Cup nears, that’s especially true. And while rolling with the whims of coaches and whom they elect to start at clubs across Europe may be cause for consternation, it’s unlikely to be as agonizing as what has unfolded in MLS over the last couple of weeks.

It was always known that MLS’s early Decision Day (Oct. 7) and single-elimination playoff format would spell an abrupt end to the season for players eyeing places on the U.S.’s World Cup roster. The league’s compressed schedule was a direct result of the World Cup being moved to accommodate the weather conditions in Qatar, so for the U.S., which marks its return to the World Cup stage on Nov. 21, to be relatively unaffected by it would have taken a minor miracle. And yet now that the cards have fallen as they have, there’s some wreckage to assess.

It starts with center backs Walker Zimmerman and Aaron Long, the duo that has started 11 times together for the U.S. (7-2-2, including a loss and draw in the most recent friendlies vs. Japan and Saudi Arabia). After Nashville SC and the New York Red Bulls’ respective eliminations in the opening round, they are due to be without competitive matches for over a month preceding the first World Cup group game vs. Wales. (Long being beaten directly by FC Cincinnati’s Brandon Vazquez, who recently said that U.S. manager Gregg Berhalter relayed to him that it was effectively too late in the squad-building process to integrate him into the U.S. setup, for the match-winning goal, was a particularly cruel twist of fate.)

The defenders could be integrated into Berhalter’s camp for MLS-based players that is due to take place at the end of the month, and that would at least bridge the gap from a fitness level somewhat, but there’s no ample substitute for live action. That puts the two center backs and others in the U.S. pool in their situation—such as right back DeAndre Yedlin, whose Inter Miami was eliminated by NYCFC Monday night; and forward Jordan Morris and midfielder Cristian Roldan, whose Seattle Sounders missed the playoffs altogether—at a disadvantage.

FC Dallas’s U.S. contingent nearly joined them Monday night. It took penalties to avoid an ouster at the hands of Minnesota United, which means that likely Qatar-bound players Jesús Ferreira and Paul Arriola (and long shot Sebastian Lletget) remain in action for at least one more match—provided they’re given a clean bill of health. Arriola was forced off in extra time with an apparent groin injury (it’s said to be minor), while Ferreira was also limping in the additional 30 minutes with apparent left leg discomfort, which he claimed was just cramps after the match in comments made to Fox. (The latter’s night also included whiffing on a would-be match-winner from eight yards out in extra time; he did convert his penalty kick in the shootout, though.)

The U.S. at least has experience with trying to prepare its out-of-practice MLS-based players for competition that matters. Before the January-February window of World Cup qualifying earlier this year, MLS-based players had been out for an extended period of time—MLS Cup was Dec. 11 and the end of the regular season was Nov. 7—and a domestic camp outside of the FIFA window in December (with a friendly vs. Bosnia-Herzegovina) and subsequent two-week gathering in January (with three closed-door scrimmages) before the official start of that month’s camp were aimed at serving that purpose. They couldn’t replicate the heat of competition, naturally, but it was at least a proactive step to make the most of the situation and keep players fit. The same could be said of the upcoming camp, which will reportedly be filled out by U-20 players.

Regardless, it’s not ideal, and by the time the pre-Qatar camp begins, which is said to be Oct. 25, four more MLS teams will be eliminated, extending the potential for angst and inconvenience and likely growing the scope of the camp roster. Running a national team is full of speed bumps. Injuries, dips in form and all sorts of things out of one’s control have an incredible amount of influence. What’s not ideal in North America (long layoffs) is countered by what’s not ideal abroad (going straight into World Cup camp midseason, having likely played a club match within 24 to 36 hours of departing for Qatar). This is a World Cup unlike any other, and those who cope with the unique and problematic circumstances stand to benefit the most in a month’s time.