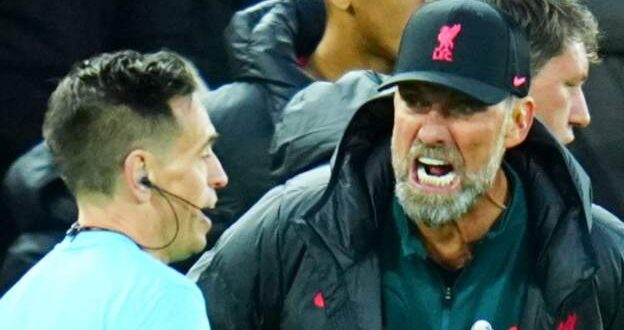 Liverpool manager Jurgen Klopp has been charged by the Football Association following his sending-off during his side’s 1-0 win against Manchester City.

Klopp was dismissed after berating a referee’s assistant when a foul was not given for a challenge on Mohamed Salah.

The incident came on a weekend where Merseyside Youth League games were postponedexternal-link amid ongoing issues with referee abuse.

Klopp apologised for his reaction in his post-match comments.

“Something snapped in that situation, I’m not proud of that. I deserved a red card, and the way I looked in this moment is not right,” the German admitted.

Klopp has been charged with a breach of FA rule E3, which covers “comments which are improper, which bring the game into disrepute, which are threatening, abusive, indecent or insulting”.

The 55-year-old has until Friday to respond to the charge and will be allowed to take his place in the dugout for Liverpool’s home game against West Ham on Wednesday.